Zachary Horvath the victim in Work It Out! (Case #10 of Grimsdale).

Zachary was a 40 year old muscular man, with brown hair, tanned skin, and bright blue eyes. At the time of his death, he wore no shirt, and a pair of red shorts.

After being sent to autopsy, Hasuro confirmed the victim got knocked out before being hanged into the ceiling and beaten to death. He also said that the killer used brass knuckles to help kill the victim.

The killer turned out to be Lucy Campbell. After denying it, she confessed eventually and explained her motive: Lucy grew up with homophobic parents; She and the victim’s were friends in high school, wnd he had feelings for her, when they were somphomores, Zachary confessed his love, where she rejected him and told him she was a lesbian, angered by rejection, Zachary told Lucy’s parents about her sexuality, where she was sent to an asylum for gay conversion. After a week she escaped the asylum and became a prostitute in Industrial Center for 5 years, before a famous fashion designer discovered her. Licy still couldn’t get over the pain she went through being sent to the asylum and being a victim of prostitution, that after 19 years, when she saw the victim again, she got mad. Lucy later explained how she seduced the victim into following to a storage room, where she knocked him out with a dumbbell, and tied up his hands, and tied his feet into the ceiling, she started laughing and described how she felt when she beat up the victim to death. Due to her lack of remorse, and her obvious pride in the crime, Judge Powell sentenced her to life in prison with a chance of a parole in 15 years 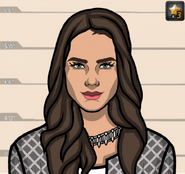 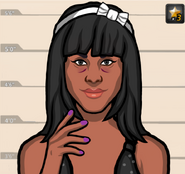 Lucy Campbell, Zachary’s killer.
Add a photo to this gallery
Retrieved from "https://criminal-case-official-fanfiction.fandom.com/wiki/Zachary_Horvath?oldid=124130"
Community content is available under CC-BY-SA unless otherwise noted.