I understand... It’s a terrible thing to be lonesome, especially in the middle of a crowd.

Yoyo Ip is a main character in Season 1, serving as a Profiler in the Grimsdale Police Department and later on in Mia’s crew at Season 4. She appeared as suspect in the murder of Aaron Camper, in Bite Him Off (Case #35 of Grimsdale) and Marisol Robertson in All Evil Comes To An End (Case #62 of Grimsdale)

Hailing from Grimsdale, US. Yoyo is a 21-year-old Hong Kongian woman with dark green hair and black eyes who worked as a profiler for The Grimsdale Police Department until she was forced to flee the city with her colleagues and the entire city after it was destroyed amid a civil war against Galinda Singh and The New Olympians. Shortly after arriving to Graecita she was assigned in a crew led by Mia Loukas where she and her friends went into adventures and rescue boarding Captain Mary Read’s ship.

As an 18-20 year-old, she dressed in a light green shirt under a dark green long-sleeve shoulder-less jacket and donned a magenta-shade lipstick. At later appearance in the season, she then changes her style and seen wearing a violet version of her outfit and in hair is tied up to two buns with a purple peony on each for decoration.

As a 21-year-old, shortly after arriving to Graecita, she was given a makeover by her Aphrodite-born sisters and is seen wearing a pink floral sundress with white laces and pink belt for support. Her hair was let down again and curled and she donned a pink peony on top of her head.

Yoyo is described as sweet and caring, however a bit of an airhead at the start but the more adventures she went through, she matured and became the mom of the group. Yoyo was known to having a relationship with the former doctor of her old school, Greg Gibbs, a relationship which was kept a secret until someone brought awareness to it, leading her boyfriend into getting fired and finding another job as a family doctor and later as a hospital nurse.

In the cutscenes before the first chapter, while the player and her now-teammates (decluding Mia) are having a fight with Brock, who was bullying Alexei, Yoyo was seen making out with Greg Gibbs, the schoold doctor in the janitor room, where they heard the janitor coming, which let to Yoyo forcing Greg to hide, while she talks with the janitor, telling him that she was waiting for her boyfriend, when asked why she’s on her undies.

The stunt she and Greg made, led to her being sent to the principal office, where she was punished along side her now-teammates, Brock, and Alexei, to be locked up in the school building.

After Alexei got murdered, she and her future teammates got expelled, because they were the top suspects, leading them to form the Fairview Justice Squad, where their top priority is to catch Alexei’s killer.

She was later allowed back into the school along side her teammates after they successfully proven their innocence by arresting Brock.

After the killer was arrested, Julian went to ask the player and Mia if they could help him find Greg, where Yoyo revealed that Greg got fired, after Hamad informed the principal about her relationship with him. After they found out where Greg lived, she, the player, Mia, and Julian, went to Greg’s apartment, where she greeted him with a kiss.

After they found the tickets, Greg gave them to Yoyo where he apologized for her. Yoyo forgave Greg, and apologized for overreacting, and they both shared a kiss.

Yoyo interrupted Diego and Hamilton while they were recapping the case, to tell them something about the murder. The duo went to speak to her, where she revealed that she knows where the victim was before the murder, and told them to investigate the faculty room. Due to her being one of the last to see the victim alive, Yoyo was added to the suspect list.

Yoyo was later spoken to again, after the duo learnt she dated the victim at her freshman years. Yoyo told them she never said a word about it as the victim broke up with her over the fact she had her period, and when she heard about him being a pedophile, she felt ashamed that she never thought about him being one, despite him making it so obvious by the way he dumped her.

After Hamilton, Vicky, Mia and Rozetta were brought to Saint Teufel, they got an Iris message from Yoyo who told them Marisol have been murdered. When Hamilton and Vicky arrived to the dome, Yoyo and Ophelia led them to the crime scene, and were then added to the suspect list. Yoyo was then spoken to again after the duo found out she broke a statue of Aphrodite, her godly parent, where she admitted was was jealous that Aphrodite favored Marisol over her, despite the fact that Marisol was evil. 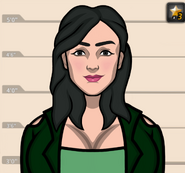 Yoyo as she appeared in Season 1 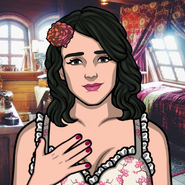 Yoyo as she appeared in Season 4 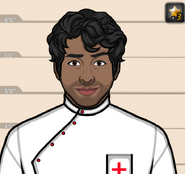 Yoyo’s character billboard
Add a photo to this gallery

Retrieved from "https://criminal-case-official-fanfiction.fandom.com/wiki/Yoyo_Ip_(Grimsdale)?oldid=252725"
Community content is available under CC-BY-SA unless otherwise noted.