Willie was a 27-year-old CCN reporter with short red hair and green eyes. He wore black suit with light blue shirt under it and black tie. He also sported CCN badge.

In his second appearence, he wore an orange-green jacket with white shirt underneath it.

In his third suspect appearence, he switched back to his black suit and light blue shirt.

The Roof Caves In 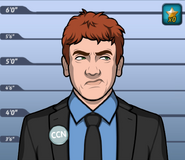 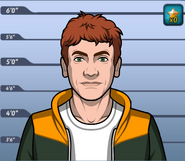 Willie, as he appeared in A Rough Diamond (Case #15 of Venusville) and in In Low Water (Case #16 of Venusville).
Add a photo to this gallery
Retrieved from "https://criminal-case-official-fanfiction.fandom.com/wiki/Willie_Redfern?oldid=191843"
Community content is available under CC-BY-SA unless otherwise noted.