William Looper is a Minor character in the Looper Rochester family. Not a lot is known about him but he was mentioned here and there in Visual Death. His wife was also mentioned

Visual Death (Case #21 of Parinaita; Mentioned and seen on Clue) 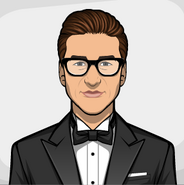 William, As he appeared when mentioned

The only picture known to be taken of William with his wife Julia. Might have been taken before they left for Britain
Add a photo to this gallery
Retrieved from "https://criminal-case-official-fanfiction.fandom.com/wiki/William_Looper?oldid=75089"
Community content is available under CC-BY-SA unless otherwise noted.