William Humble Justice is a character from the series of Parinaita. He is the 2nd city judge in the series and replaced Alex Holiday after he died in A Light Lunch of Guts (Case #35 of Parinaita) 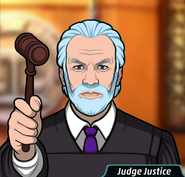 William Humble-Justice, When he is sentences someone to prison
Add a photo to this gallery

Retrieved from "https://criminal-case-official-fanfiction.fandom.com/wiki/William_Humble-Justice?oldid=88144"
Community content is available under CC-BY-SA unless otherwise noted.