When Madness Smiles is a case featured in Criminal Case as the forty-eighth of the game. It is the last one that takes place at Wellness Fortress in New Cresthill.

Rushing to Joseph Crestwood Asylum to stop Raduga Shest from killing Osiris, Evan and the player boarded a patrol and drove as fast as possible. Upon arrival, they saw several patients from the asylum running away and several nurses and doctors chasing them. They entered the asylum and went to Osiris' room, which was with the door open. As they crossed the threshold, they found Frederic Spades with a bleeding neck, Preston Blackman with no ears and a mutilated face, Gustave Ogawa with a broken head and, in her bed, Alleria Brown trying to stand up, with a cut smile on her mouth area. Before she died of blood loss, she told the duo that she was able to kill King Ahab, Ramses II, and Cain, but Abimachel was the one who could beat her, giving her last breath and falling to the ground. Priscilla revealed that Alleria had used her teeth to kill Frederic and Preston while managing to break Gustave's head using her knees and head, however, Abimachel had slowly cut a smile on Alleria's mouth. They questioned asylum patient and Alleria's boyfriend Shawn Wright, former deputy mayor Benjamin Nelson, babysitter Armin Doblas and, professor of Marxian Ethics Marcus Doe. Soon after, Warden Edward Berkley came to the station to confess that Gustave and Preston had been released from prison on someone else's orders.

Edward confessed that he had released the criminals on the orders of Chief Galdwey and Mayor Brooks. However, Selena denied this, to which Edward asked why Rogelio told him otherwise. When Rogelio was asked why he did that, he mentioned that he knew it was a risky tactic to get all Raduga Shest members ambushed but the opportunity would probably never come back and it was a necessary sacrifice. They suspected window cleaner Kael Lartigue as well as discovering that Marcus was protesting outside the prison for the release of several prisoners, including Preston and Gustave, after the mass poisoning with the excuse that the government had failed them. Also, Armin was spying on Alleria and Shawn because the fact that they were sentenced to prison didn't mean that they weren't planning crimes and, Shawn was receiving electroconvulsive therapy from the asylum doctors to confess all of Alleria's secrets and thus give him a lesser sentence. Upon returning to the station, the team gathered to receive the following orders from Chief Galdwey; however, suddenly all the doors and windows began to close in an emergency protocol activated by Rogelio, who was outside the station getting on a patrol.

The team managed to escape from the station and locate Rogelio. He said he locked them up because he had to catch Abimachel personally to satisfy his thirst for revenge that was born due to Ethel's death for helping them that, if not because they had to catch Alleria, she would still be alive. In addition, Alleria sent letters to Benjamin to move his influences to set her free, but he refused despite the fact that she was the one who caused him to be deputy mayor of the city and, Kael wanted to kill Alleria in her asylum room, making her suffer just as she did with him, his father, and his brother. Finally, the team arrested Marcus for the crime.

Marcus was ambushed by the entire police department and, seeing that he had no escape, confessed to killing Alleria with a laugh. Since Alleria had told the player and Evan how he attacked her, Marcus revealed that Raduga Shest had been operating in the shadows for years and that he was in charge of brainwashing people to make it difficult to arrest their comrades. Also, he revealed that he was working with Ian Butler, his alias Herod, and with a member of the police department, who would be Lucifer. As his last escape maneuver, Marcus tried to detonate several bombs that were underneath all the patrols, luckily Rogelio used a taser and knocked him unconscious. Judge Blanton sentenced him to life imprisonment and sent the team to arrest Ian and figure out who the traitor was.

Post-trial, Evan and the player went to locate Ian since he was not at Butler Silk. After finding Herod's robe in the Osiris pantheon, the team went to Suzette Butler to confess where her son was. Quickly, she confessed that he was hiding where his grandfather's wine cellar was. When trying to arrest Ian, he argued that he was hiding as Shawn gave him a call alerting him that Marcus had lied associating him with Raduga Shest. In all evidence that the duo showed, Ian continued to deny being a criminal. Eventually, Evan got tired of hearing Ian's excuses and handcuffed him, causing Ian to scream that they trusted Marcus's word and not his.

Meanwhile, Selena went to check whether the confession that there was a traitor among the members of the police department was true. At the gates of the prison, she found with the player packets of rainbows that hid Frederic's map of the attack against Alleria with a dot in her room with the description: Here will go the "NCPD warrior". After analyzing it, both returned to Osiris's room, where they found a chest with Lucifer's robe with an NCPD emblem embroidered on the bottom of it. Finally, Mayor Brooks wanted to speak to the entire police department. Since there was a traitor among them, the city would refuse to take the team seriously. Therefore, he decided to send them to Odyssey Gardens to avoid getting into trouble while the investigations began, also meaning that volunteer citizens would be their replacements to help the player unmask the mole. 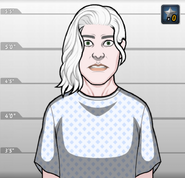 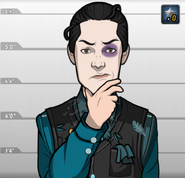 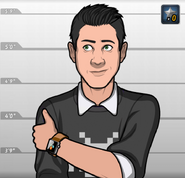 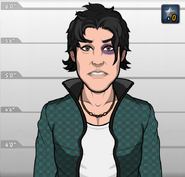 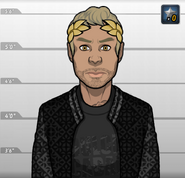 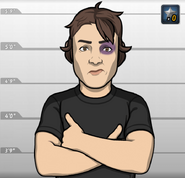 Kael Lartigue
Add a photo to this gallery 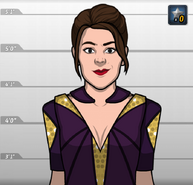 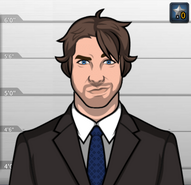 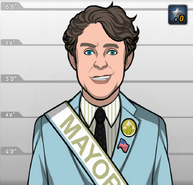 Chris Brooks
Add a photo to this gallery

Retrieved from "https://criminal-case-official-fanfiction.fandom.com/wiki/When_Madness_Smiles?oldid=214984"
Community content is available under CC-BY-SA unless otherwise noted.