Vito Panzica is a main character featured in Season 1 of Criminal Case, where he served as the Aurelian Law Enforcement Agency's Weapons Expert.

He became a suspect in the murder investigation of his half-brother, mobster family heir Valentino Panzica, in The Barrel of a Gun (Case #23 of Aurelia) before he became the killer of prisoner Jax Morell in The Team Led Astray (Case #59 of Aurelia).

41 years of age, Vito wears a brown film noir hat with a light grey band over combed brown hair and brown eyes. He wears a light blue striped collared shirt and a grey pinstripe vest over a grey blazer with a black armband, reading FBI in white letters. He also equips a belt of bullets and a light brown badge of the PD.

On a Power Trip

A Test of Time

The Barrel of a Gun 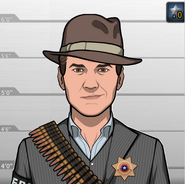 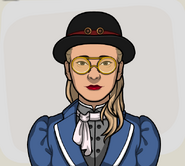 Valentina Panzica, Vito's cousin.
Add a photo to this gallery

As the Weapons Expert of the Aurelian Law Enforcement Agency, Vito has the responsibility of taking care of necessary ballistic analyses, and to inform the team of such results after a certain amount of time or a speed-up process using Criminal Case Cash. His task-wait rates vary depending on the difficulty of the task, but they all cost 1 Criminal Case Cash per 30 minutes.

Below is the list of analyses Vito performs throughout the course of the game:

Case #4: Fight to the Death

Case #6: Dead of a Broken Crown

Case #11: The Weight of Justice

Case #22: Whatever Floats Your Boat

The player may choose Vito to join the investigation of each crime scene and provide hint bonuses. He is available as a 2-hint, level-10 partner.

Retrieved from "https://criminal-case-official-fanfiction.fandom.com/wiki/Vito_Panzica?oldid=104763"
Community content is available under CC-BY-SA unless otherwise noted.