45 years of age, Viola had short, dark brown hair in a pompadour hairstyle and brown eyes. She wore a seaweed green vest over an orange ornate dress. Additionally, she had a pair of long golden earrings.

Viola was found dead on the docks, leaning against a barrel with her throat slit. A saddened Richard confirmed that Viola was killed after her carotid arteries in her neck were cut, resulting in her death. He also confirmed that the killer played golf.

The killer turned out to be her boyfriend, chemist Vincent Saunders.

Vincent quickly confessed to killing Viola, insisting that he had to kill her. Vincent further explained that Viola and Cayden had been writing a play together and that Viola planned to leave the medicinal care shop to go work at the theatre and follow her passion. Vincent started sobbing, saying he relied on Viola and that she was going to leave him so he asked them to meet by the docks on the day of the murder for a romantic date. When Viola arrived, he grabbed her and slit her throat, ending her life. Infuriated by Vincent's actions, Maddie arrested him for her friend's murder. In court, he was sentenced to life imprisonment by Judge Oakley. 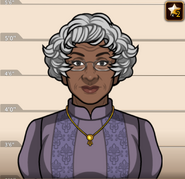 Viola, with her late stepfather James Pemberton.
Add a photo to this gallery
Retrieved from "https://criminal-case-official-fanfiction.fandom.com/wiki/Viola_Pemberton?oldid=86044"
Community content is available under CC-BY-SA unless otherwise noted.