Vanya Bhakta née Joshi is a main character in Criminal Case Venusville,where she serves as the Chief of Police of the Venusville Justice Fighters.

She became a suspect in the murder investigations of family doctor Hanis Mura in Arrow of Time (Case #12 of Venusville) and Urania Rozetta Pierre in An Icy Inferno (Case #60 of Venusville).

Vanya likes Bollywood music and enjoys playing cricket.She was raised in Bombay and she is known to be calm and sweet in most of the times.

In her second suspect appearence, Vanya has scratches on her right cheek.

As the Chief of the Venusville Justice Fighters, Vanya requires reports from three different "teammates" (friends who play Criminal Case and are recruited to the player's team) before she can let the player advance to the next case of Venusville. Besides that, she notifies the player each time they level up in the season.

Also, the player may choose Vanya to join the investigation of each crime scene (in any case of Venusville) and provide hint bonuses. She is available as a 5-hint partner. (This feature is only available in the mobile variant of Criminal Case.)

-Case #2 Across the Board 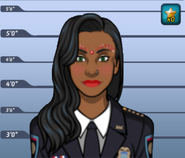 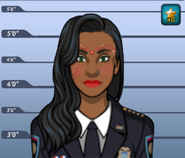 Vanya, as she appeared in An Icy Inferno (Case #60 of Venusville)
Add a photo to this gallery
Retrieved from "https://criminal-case-official-fanfiction.fandom.com/wiki/Vanya_Bhakta?oldid=192973"
Community content is available under CC-BY-SA unless otherwise noted.