Valentina Panzica is a main character featured in Season 2 of Criminal Case, appearing as the Stonemoorian Justice Enforcers's Consultant prior to be promoted to Chief of Police.

She became a suspect in the murder investigation of Lake Town sheriff Tyrone Heller in The Town That Dreaded Sundown (Case #6 of Stonemoor). During the events of To the Bitter, Bloody End (Case #65 of Stonemoor), she was promoted to Chief of Police following Dustin Flanagan's sacrifice.

Foam at the Mouth

After Hilda Garza was arrested for Henrietta Castral's murder, Valentina told the team that she had followed Duncan Vansickle, whose connections to the drug operation in Lake Town had been discovered, and saw him board Imogen Dawson's boat with the drugs. With Valentina's information, the team then decided to head to Imogen’s boat party to keep an eye on the drugs that will be sold there and learn more about the operation that was plaguing the district.

Just Off the Boat

Following Constantine Newmark's arrest, Valentina wanted to investigate her mafia past to find out why the drug operator would have a lighter belonging to the Italian mafia. They soon went to the caves where Valentina told them that the mafia often buried their secrets. They soon found a pile of dirt that contained some burnt metal, which Fleur Harrison and Emilio Fernandez identified were handcuffs with some burnt skin cells belonging to mobster Valentina's ex-boyfriend, Crescenzio Casazza. Crescenizo explained that he had been caught with the possession of drugs and he wouldn't let them capture him again as he fled the scene, leaving an angered Valentina and the player in the dust.

The Town That Dreaded Sundown

Valentina was suspected after her crest was discovered in the late Sherriff Tyrone Heller's office. When questioned, Valentina explained that she went to Tyrone's office to discuss the drug operations in Lake Town and urge him to monitor places where the drugs were being dealt; the train stations, docks, and pubs. Valentina insisted that she had nothing to do with Tyrone's murder and promised to help out in whatever way she could, prompting Spencer to tell her to head back to the precinct.

She was questioned again after a note about Tyrone was discovered in a trash can. Valentina confessed that after she left the mobster way of life, Tyrone was there to support her and help her through it. She admitted that she was able to confide in Tyrone and exclaimed that he became a a close friend, explaining why she was so shocked when she discovered he was the mastermind behind the drug scheme.

Valentina was found to be innocent when Ilsa Tremaine was incarcerated for the murder. Post-trial, however, Valentina and the player thought about the rehabilitation of the district. Eventually, the pair consulted therapist Maria Leroux who organized a rehabilitation plan for the addicts of the drugs, which Chief Flanagan had sent to the addicts. 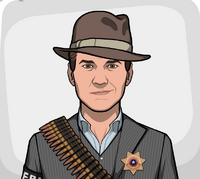 Vito Panzica, Valentina's cousin.
Add a photo to this gallery

Retrieved from "https://criminal-case-official-fanfiction.fandom.com/wiki/Valentina_Panzica?oldid=200319"
Community content is available under CC-BY-SA unless otherwise noted.