Case #21 No Prey, No Pay
Tyler Highmore (1995-2019) was a main character appearing in Criminal Case Venusville, where he served as a Tech Expert of Venusville Justice Fighters.

Prior to joining the police, he was a suspect in the murder investigations of three people, made two quasi-suspect appearences and made two minor appearences before his death in An Icy Inferno (Case #60 of Venusville).

Tyler was a 24-years-old tech expert of VJF and boyfriend of now late Ben Hathaway. He wore buttoned red jacket with white sleeves. He had tanned skin and had brown hair and green eyes.

In his third suspect appearence, he had a rash on his forehead.

No Prey, No Pay 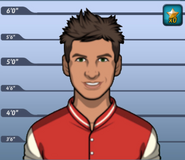 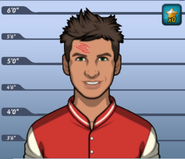 Tyler, he appeared in Brink of Disaster (Case #30 of Venusville).
Add a photo to this gallery
Retrieved from "https://criminal-case-official-fanfiction.fandom.com/wiki/Tyler_Highmore?oldid=192440"
Community content is available under CC-BY-SA unless otherwise noted.