Trevor Finn was a suspect in the murder investigation of his nephew, Philip Hoover. in A Priceless End (Case #12 of Grimsdale). He later got murdered in Life With No Money (Case #26 of Grimsdale)

Hamilton walked to the bank, where he saw Hamida waiting for him. The duo entered it, and went into the Trevor’s office. There they found Trevor dead, with his head bashed, and an unconscious bodyguard.

The killer turned out to be Alejandro Zamora. After multiple attempts to deny it, Alejandro confessed. He then told the duo he killed the victim for deceiving his clients. The duo were confused, and asked for an explanation, where Alejandro revealed that while spying on the victim, he found out the real reason why the stolen money never went back to the clients, which is that Trevor kept it for himself, and was smuggling it to a cult called “The Anoterous”. In the court, Alejandro was sentenced to 20 years in prison.

Trevor barged in the station, after hearing about his nephew’s death, where he demanded the team to find the killer or he’ll call the FBI to do the job instead.

He turned out to innocent after Fayzah Jawab was arrested for the crime. 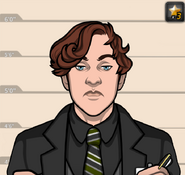 Philip Hoover., Trevor’s late bephew.
Add a photo to this gallery
Retrieved from "https://criminal-case-official-fanfiction.fandom.com/wiki/Trevor_Finn?oldid=179502"
Community content is available under CC-BY-SA unless otherwise noted.