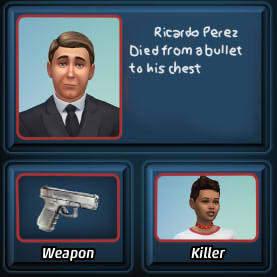 To Live and Survive is the fourth fanmade case of Agunachopace. Is also the fourth case of the Nice Land district in the fictional city of Little Hollow.

The victim was a latinamerican news man called Ricardo Perez. He was making a documentary about how dangerous the Grayland Apartments are and evil that is the people who live in them. Before finishing the documentary, he was killed by a bullet in the chest.

The killer was a local teenager, Croopes Liriam, who also lived in the Grayland Apartments. People of Grayland Apartments disliked the story of Ricardo, as it gave a very bad image of the neighborhood. In addition, Ricardo teased and harassed people, as Momma Jackson or Veronica Adles. Croopes Liriam not stand this situation and murder the man in cold blood.

In court, Liriam claim the rights of citizens to be respected and was supported by Gilda Amalda, the social worker of Grayland Apartments. She was sentenced to 10 years in prison, with chance of parole after 5 years. The research link Ricardo Perez with the case of Adam Bester (Free Bay) and showed than the reporter also worked with the Great Secret. But Richard was killed by other causes.

Retrieved from "https://criminal-case-official-fanfiction.fandom.com/wiki/To_Live_and_Survive?oldid=12770"
Community content is available under CC-BY-SA unless otherwise noted.