Thomas Ernest was a main character featured in Season 1 of Criminal Case, where he served as the Flaming Eagle Police Department's Chief of Police.

He was a suspect in the murder investigation of politician Daniel Willingham in Tallying Up the Votes (Case #46 of Rosenoque). He was then murdered in The Thorn Amongst the Roses (Case #54 of Rosenoque).

Hailing from Seattle, United States of America, Thomas was the 47-year-old chief of the Flaming Eagle Police Department who worked as an undercover cop prior to his tenure in the department. He was a tall, medium-sized man who has fair skin, short brown hair, green eyes, and a short light brown mustache. He normally sported a typical Chief of Police uniform which consists of a black suit with badge aplenty, five stars on the shoulders, two pockets at the front, and a few medals on the left as well as a black hat that had a golden lining, two golden eagle emblems and a golden badge in the middle. Underneath the suit, Thomas wore a white shirt and black tie, and had two golden pins on both sides of the suit's collar. Other than that, Thomas had a black badge of the Flaming Eagle PD pinned to his left.

Thomas was known to be a chief who relied on his team and loved his team, no matter how strange its members may be. He was also known to be methodical in his line of duty and widely charismatic. Thomas enjoyed getting out into the field, catching criminals and watching romantic fiction on Netfilms. However he had a weakness for fresh cups of coffee. It was also known that his favourite food was taco salad and his favourite animal was a lion.

Per his suspect appearance, it was noted that he used a Rolington typewriter. He was also seen wearing an "I VOTED" badge rather than his FEPD badge. 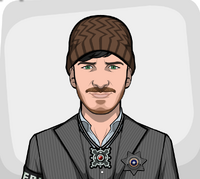 Thomas, as he appeared in Threat from the Past (Case #45 of Rosenoque) 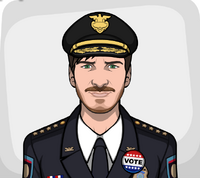 Thomas, as he appeared in Tallying Up the Votes (Case #46 of Rosenoque)
Add a photo to this gallery

Retrieved from "https://criminal-case-official-fanfiction.fandom.com/wiki/Thomas_Ernest?oldid=121385"
Community content is available under CC-BY-SA unless otherwise noted.