Start a Wiki
The Wife, Husband and Victim it is the last case of the Regas City, and the sixteen at Cooold City. This marks the wife of Amy and Jones. And.... is the first case with 10 victims, and 5 chapters.

Chapter 1: With the gun
It all starts when the big day arrived, Amy comes to the altar dressed in white, while Jones arrives with his elegant suit. And when the couple signs and says yes, they become husband and wife. During the cocktail, Serena arrives and catches Andrea with a gun and takes it to an Alpine mountain. Upon arrival, Jack Archer is dead Serena Johnson. First, they take the autopsy, which declares that the murderer wears light blue clothing. The suspects are Marina Romanova, Charlotte Jenkins and Andrea Marquez.

Chapter 2: Suspected
Randolph, the "alien" was found murdered with the same gun that killed Serena, here was when they found the second track to charge the murderer, the murderer sees science fiction. In addition, also they found dead Susanne Charmin, mother of TV host). It is carried an autopsy and Nathan says that the murderer pistol use only the three victims, so you have good aim. Finally, Howard Johnson found dead, even in one blameless autopsy data does not appear. The suspects who were added to the case are Amy Young and David Jones.

Chapter 3: In prison
Harvis Donne, the doctor was found dead in a hotel suite, and Amy Young is accused of the murders. It is here, where Jones and the player are removed from office, and Francesca Do Miretti assumed as chief of police. At autopsy the doctor, a test that incriminate the murderer was not given. Finally, Hannah Choi is murdered, and his successor Bureau replaces Elliot Clayton. The suspects in this chapter are Elliot Clayton, Maree Alexander and Francesca Do Miretti.

Chapter 4: When the people is bad
This time the victim is Alden Greene, the meanest man in town. He was killed with a gun, like other people. At autopsy, he is declaring that the murderer studied chemistry. The other victim of the chapter is Donald Greene's brother Alden, after searching the way to find the murderer of his brother, is killed. The suspects in this chapter are Chris Alexander, and Khiss Bern, member of the international band "Kiss".

Chapter 5: The Great Finale
The chapter begins when a member of the international band "Kiss" to a meeting with Francesca Do Miretti, to say that Jones, Jack and the player are doing a private investigation. It is here, when Francesca decides to arrest the team of researchers. But after a new death, the team decides to escape to discover the culprit. The ultimate victims are, Miriam Young and Duncan Young. The last track is to arrest the murderer is a woman. Given the star was arrested last Francesca Do Miretti.

Additional Investigation: Out of City
Additional investigation begins when Amy is released from prison and decides to tell Jones that she is pregnant for 1 month. Then, Jones asks the player to help you find baby shoes that had given him. Jones's reward is a black suit. In addition, Chris Alexander asks explanations to the police and ask for help; the reward is 20,000 coins. And finally, Maree Alexander wants to talk to Jones, to have security and be transferred elsewhere; the reward is 500 XP.

Francesca Do Miretti was thirsting for revenge for being kicked out of the police team, which is passed by a young woman who was truly a woman of 54 years, and it really is not the sister of Cathy Do Miretti, it is the mother.

This case don't have the info of another case. 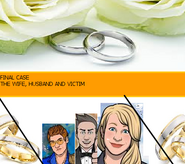 Promotion of the Case
Add a photo to this gallery
Retrieved from "https://criminal-case-official-fanfiction.fandom.com/wiki/The_Wife,_Husband_and_Victim?oldid=20114"
Community content is available under CC-BY-SA unless otherwise noted.