Taylor is known for being very secretive against people they don't know. They are seen wearing a Russian red fur coat with gold buttons. They also were a grey Bandager around their neck. They also have a skull painted on their face. The only thing you can see are their green eyes. 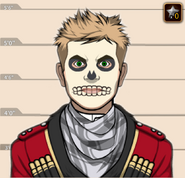 Taylor, As he appeared in Sticks and Marbles, The Invisible Enemy and A Rotten Series of Events 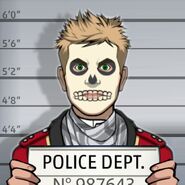 Retrieved from "https://criminal-case-official-fanfiction.fandom.com/wiki/Taylor_Looper_Rochester?oldid=77680"
Community content is available under CC-BY-SA unless otherwise noted.