Taylor Long was a suspect in the murder investigations of three people in Laroy Bay before being suspected of the murder of award ceremony host Silvano Zurita in Star-Studded (Case #4 of Return to Laroy Bay).

Taylor is 25-year-old singer and ex-girlfriend of Marcus Young. She has long blonde hair and black eyes. She wears light blue sparkly dress and gold earrings. She sports blue rose.

In her third suspect appearence, she wears an ''I VOTED'' badge.

In her fourth suspect appearence, she has scratches on her chest.

Taylor became a suspect after team found picture of her and team's cop Marcus Young on crime scene.She said that Marcus is her ex-boyfriend and that they broke up because of his violent behaviour.Megan Alan claimed that Taylor is lying and that Marcus is not violent.

Taylor was spoken to again after team found picture of her and Joe Warren.She said that Joe was her dad's friend and that he was a cool guy,but she hated him after he reported her robbing a mansion when she was a teen,causing her to spend 3 months in juvie.

Taylor was found innocent after team arrested Tobias Butler for a murder.

In the middle of investigation,Taylor showed up and refused to talk with Marcus Young so player had to interrogate her alone.Taylor warned player about Marcus' violent side and told them that they should fire him,but player didn't believed her.

Taylor was interrogated again by player because she refused to talk with Marcus about shirt with Sara's face without makeup.She said that Sara was a witch and that whole world should know that she is not beautiful at all,even though magazines called her one of the prettiest woman in the world.

Taylor was found innocent after team arrested Sofia Novikova for a crime.

Taylor was spoken to after team found her FriendNet story where she mocked Sandy Corey.She said that Sandy was obsessed with her and followed her everywhere,so she humilated her on FriendNet.

Near the end of investigation,Taylor Long showed team a video of Marcus hitting her 2 years ago.Marcus apologized to team for lying to them and claimed that he was young so he ran away from station.

Taylor was found innocent again after team arrested Martha Price for a murder. 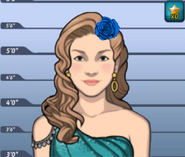 Taylor, as she appeared in The Showstopper (Case #43 of Laroy Bay) and Long Beauty Sleep (Case #47 of Laroy Bay) 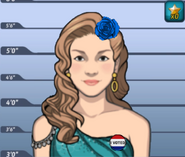 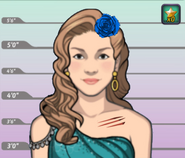 Taylor, as she appeared in Star-Studded (Case #4 of Return to Laroy Bay).
Add a photo to this gallery
Retrieved from "https://criminal-case-official-fanfiction.fandom.com/wiki/Taylor_Long?oldid=195214"
Community content is available under CC-BY-SA unless otherwise noted.