Tanner is the 37-year-old leader of a street gang. He has shoulder-length brown hair and green eyes. He is seen wearing a blue shirt underneath a red sleeveless jacket. He also wears a scarf and a green four-leaf clover brooch.

In his first suspect appearance, it is known that Tanner drinks beer.

In his second suspect appearance, it is discovered that he eats steak, has traveled to Fario and knows how to fight.

Get the Finger Out 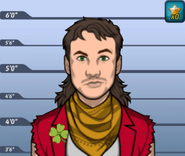 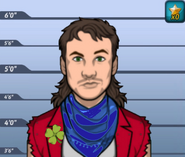 Tanner, as he appeared in Heads Up (Case #6 of Pheadmouth). 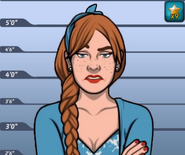