Susan Parker is a main character featured in Season 1 of Criminal Case, appearing as the Detective of the Alpha Bay Police Department, she serves as one of the player's partners throughout the season.

27 years of age, Susan has chin-length black hair and brown eyes. She is seen wearing a blue jacket over a light chestnut turtle-neck shirt with cyprus accents and sporting an army badge. She is described as a optimistic, strong-willed and friendly person.

In her first suspect appearance in Exposed in Plain Sight, it is known that Susan plays piano, is a gambler and can sew.

In her second suspect appearance in The Crimes of Cascade, it is discovered that she has read Animal Graveyard, eats pizza and drinks wine.

The Crimes of Cascade

The player may choose Susan to join the investigation of each crime scene (in any Alpha Bay case she teams up with the player) and provide hint bonuses. She is available as a 1-hint, level 12 partner. 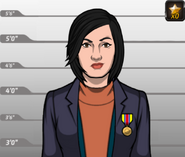 Susan, as she appeared in Exposed in Plain Sight (Case #19 of Alpha Bay) and The Crimes of Cascade (Case #46 of Alpha Bay). 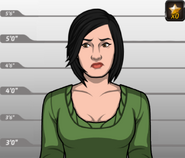 Susan, as she appeared in Shift of Doom (Case #30 of Alpha Bay). 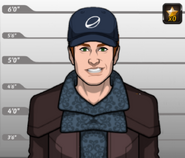 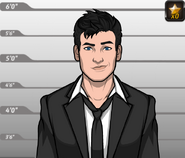 Mark Reynolds, Susan's ex-boyfriend.
Add a photo to this gallery
Retrieved from "https://criminal-case-official-fanfiction.fandom.com/wiki/Susan_Parker?oldid=236086"
Community content is available under CC-BY-SA unless otherwise noted.