Summer is an 17-year-old high school student, she is seen with red hair and wears an white shirt with black sleeves. It is known that she is right handed and knows self-defense and likes baseball.

The Murder of James Klebitz

She became a suspect after the player found a photo with the victim near the crime scene, the team later confront her after they found that her and the victim consume weed, when the team asked her about where she got the drugs, she refuse to tell about it. At the end the team found enough evidence to arrest Hiroshi Hasashi for the murder of James

The Murder of James Klebitz (Case #1 of Special Investigation) 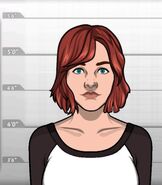 Summer, as she appeared in The Murder of James Klebitz (Case #1 of Special Investigation). 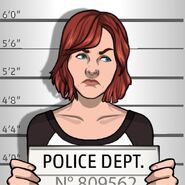 Add a photo to this gallery
Retrieved from "https://criminal-case-official-fanfiction.fandom.com/wiki/Summer_Brooks?oldid=85716"
Community content is available under CC-BY-SA unless otherwise noted.