After Ophelia found Mia and Hasuro, she helped them up and decided to take them to her hideout. First she stopped at an area in the to yell for her partner, but didn’t get a call back. Mia and Hasuro decided to help and when they searched the forest, they were surprised at seeing the dead body of Steve Liveman, the Anoterous leader, impaled by branches.

Jesse McAlpine turned out to be the killer. Jesse told Mia and Hasuro that he was actually in love with Galinda, due to her beauty, intelligence and confidence, all of which are qualities he looked for in a woman, and that he really wanted her to love him back, but knew he had no chance due to him being an Anoteros and his babyface. Jesse then thought, if he killed Steve, she’s go crazy for him and give him a chance, so when Ophelia and Steve left, he followed them, waited until Ophelia is out of sight, where he pushes Steve into pointy tree branches, killing him by impalement. The duo Iris-messaged Galinda, who laughed at Jesse for thinking a boy like him would manage to satisfy her, and decided that since the Anoterous won’t be fans of Jesse’s reasons, they’ll probably punish him, a similar or worse way than Galinda intended to. And she was right, as after being presented to he Anoterous, the duo, Rozetta, Ophelia, Kelemen, Vladimira and Susan heard gunshots coming from behind the walls.

Steve became a suspect after his fingerprints alongside Polly’s and Gerard’s were found on a bottle of vitamin D supplements. He told the team that he is saddened by the victim’s death as he was the first to greet him when he moved to Old Valley.

Later on, Mia and Hamilton broke up a fight between him and Adrian, where Adrian revealed that all the photos took by Gregory were sold to Steve. When interrogated again, Steve said that the Gregory did take photos specifically for him, but it wasn’t because of sexual desire, it was for business, which Steve refused to reveal. Mia then accused him of being The Virgin Slayer and that Gregory was talking photos for him, so he can see which girl is worthy of being raped, which Steve denied. Steve turned out to be innocent of Gregory’s murder.

Steve became a suspect after his collection of photos were found near the river. When confronted about it, he denied being the slayer, and insisted the photos Gregory took for him were for business which refuses to reveal.

He was interrogated again, after his collage of the victim, telling her ‘he needed her’ was found on the cave. Fed up with their accusations, he decided to confess about his shady business. He revealed himself as a rich brothel owner in the Industrial District, and that the photos he got from Gregory was so he could see which girls are worthy to hire. He sent the collage to the victim, as a way to convince her of becoming a prostitute in his brothel.

Too Hot to Handle

Randall came up to the station saying that Steve have thrown an auction at his brothel to sell his unwanted girls. Hamilton, Hamida, Mia, Diego and Bruno, went into the auction and stopped the biddings. After finding the dead body of one of his prostitutes, Dolly at her own room, Hamilton and Hamida went to inform Steve about it.

They later spoke to him again, after finding a message he sent to the victim saying that the auction was her fault. When they asked him about it, he revealed that before The Virgin Slayer was arrested, upon hearing that Steve was a suspect, Dolly spread a rumor in the brothel that he is The Virgin Slayer, this caused many girls to leave their job. After his innocence was proven, the girls came back, however Steve wanted to punish them, and so he pulled the auction as an act of pettiness, and decided to sell Dolly with the lowest initial price.

Steve was proven innocent, after Invidia was arrested for the crime. However, Nyane came to the station, asking Hamilton and Mia for help, to prove to Steve that she didn’t steal from him, and that it was Dolly, so Nyane can keep her job as a stripper, rather than being hired, or allow Steve to turn her into a hooker. After finding the stolen money, they gave it to Steve, who forgave Nyane and allowed her to stay a stripper.

Steve became a suspect, after the team found the body of escaped convict Brock Perry in his brothel. When he was asked whether he is aware of Brock’s presence in the house, he revealed that he knew Brock was in here, with a another convict, Trish Coletti, and that he allowed them to settle in brothel, thinking they were arrested for drug use.

Hamilton and Mia decided to go inform Steve of “Emma’s” murder since she worked for him as a disguise. When they informed him, he was bummed, because Emma allowed the business to gain lots of money, and with her gone, Steve will be receiving less money than usual.

Steve was later interrogated again, after the duo found out he was blackmailing the victim. There he revealed that he discovered this morning, that “Emma” is actually a private investigator called Penelope, and he wanted to use this to blackmail her, into giving him ALL the money she received. Unfortunately, for him, Penelope was already done with her job at the Industrial District, this afternoon.

Steve became a suspect after a button from his tuxedo was found in the security room. Diego and Hamilton decided not to speak to him about the Anoterous and when they came to him, he greeted them and when the duo started discussing the murder, he promised that this sort of thing won’t happen again in the nightclub grounds. He was then spoken to again, when Rozetta showed the duo a video on the victim’s phone, where Gail was accusing Steve of “rape”, simply being he said hello to her.

Steve became a suspect after Vicky informed Mia and Hamilton that he paid Hyrum a visit. When asked about the visit, Steve revealed he was old friend of Hyrum and that his brothel used to be Hyrum’s property, and was bummed when hearing of Hyrum’s death. The duo later on discovered that Hyrum was planning to shut down Steve’s brothel, and when they went to speak to Steve, he revealed he felt betrayed.

After collecting enough evidence, Mia and Hamilton went to arrest Steve for the murder of Hyrum Lopez. When Mia and Hamilton came to confront Steve, he smirked and admitted to the murder, claiming that he did it as a distraction for them until “we gather up”. Mia and Hamilton were confused, until Diego came panicking saying that there are over 50 people surrounding the station. Mia and Hamilton went outside the station, where they saw everyone who was inside it, including Mira and the suspects of the case (except Kelemen and Vicky), being faced by armed people. The duo then looked at Steve, who laughed and revealed himself as the Anoterous leader, and told them that they fell into his trap. Steve then told his people to capture the team, before he left the area and escaped. The team then entered the station and started panicking, but then, they fell asleep. Hamilton and the rest of the team, woke up where they saw that the Anoterous members that surrounded the station, were tied up and caught Kelemen looking at himself on Nyane’s mirror. The team were about to arrest him, but he pulled Mira’s hand and chanted greek words on the mirror he was holding, where he and Mira suddenly disappeared.

After Steve escaped, at the wreck room, Mia and Hamilton received an Iris message from Kelemen, asking to speak with them. Hamilton and Mia decided to accept Kelemen’s message, asking him whether he wanted to give himself up, where he laughed telling them he wouldn’t do such a thing and that he messaged them to help them catch Steve, revealing that after he (Kelemen) drugged everyone at the station, he ran after Steve all the way to the city’s square, where he lost him. Mia and Hamilton then went there, where they found a flask, but instead of alcohol, they found water. The duo didn’t care much of this detail, but sent the flask to Sploder, in hopes that he’ll find something that’ll lead them to Steve, in which he revealed that the water in the flask, was fresh water straight from a waterfall, and that the only waterfall he could think of in Grimsdale, is the one at Old Valley’s woods, where the Virgin Slayer committed his murders. Hamilton then remembered that he and Hamida found Steve there before, and deduced that visiting that place must be a habit for Steve.

After being done with everything, Hamilton decided to stay with Vicky a little bit more, before he got a text from Mia telling him she’s waiting for him outside, to go with him to Old Valley’s woods. Hamilton went outside, expecting Bruno to drive them, and was shocked when he saw a car that looked nothing like Bruno’s, with Mia on the wheel. After Mia assured him she’s got a driving license, Hamilton hopped in the front seat next to hers, and they drove all the way to Old Valley. Mia parked the car near the forest, and then she and Hamilton walked all the way to the waterfall, where they saw a guy, holding a gun, guarding the area. Hamilton guessed that there must be a cave behind the waterfall and started thinking of a way to sneak past the guard, where Mia showed him two pins, and told him that Rozetta told her that she and Hamilton should where them, in case they needed a disguise. The two wore the pins, where they suddenly possessed the shape of two of the Anoterous members that tried to capture them at the station, and then showed themselves to the guard who allowed them to pass. At the cave, they saw approximately 50 members, the only members left, and Steve in the middle making a speech.

In the speech, Steve told the members everything that went on at the station, before he close his eyes, announcing that the Anoterous was disbanded, leaving everyone in shock, including Mia and Hamilton. One of the members raised her hand and asked him why he’s doing this, where Steve revealed that although they have the weapons, they don’t have enough members, and that the whole of Grimsdale knows about them by now, and even who he truly is. Steve then told everyone that he’ve been meditating, and while he was doing that, he could since divine forces, evil forces, indicating that the New Olympians reached their goal. He then dismissed the meeting, and told his members that in case they want to hide from the New Olympians, the base is open for them. 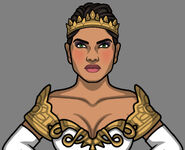 Galinda Singh, Steve’s sister and step-daughter
Add a photo to this gallery
Retrieved from "https://criminal-case-official-fanfiction.fandom.com/wiki/Steve_Liveman?oldid=208360"
Community content is available under CC-BY-SA unless otherwise noted.