Standish Curtis was a suspect in the murder investigation of Karen McDonald in Speak My Friend, and Die! (Case #3 of Fario) and onvention planner Peter Mansfield in Bloody Tears (Case #5 of Fario), but he also made appearence as quasi-suspect in Take Your Sin Away (Case #2 of Fario) until he was murdered in Even Dead Cause Troubles (Case #6 of Fario).

Standish is a 51-year-old bald with blue eyes.

Take Your Sin Away

He was interogted after team found his ID memebership card.

Speak My Friend, and Die!

He become a suspect after Peter found messages between victim and him him. He was interogated once more when Stella inform team that he had big fight with victim. In Holly Blood 3/6,he was questioned about leader of cult, shen he refused to say Diego wrote him a fine. 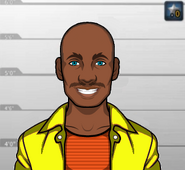 Standish, as he appeared in Take Your Sin Away (Case #2 of Fario) and Speak My Friend, and Die! (Case #3 of Fario). 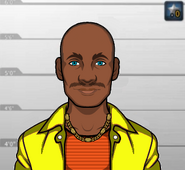 Standish, as he appeared in Bloody Tears (Case #5 of Fario).
Add a photo to this gallery
Retrieved from "https://criminal-case-official-fanfiction.fandom.com/wiki/Standish_Curtis?oldid=82843"
Community content is available under CC-BY-SA unless otherwise noted.