Sienna Everett is a main character featured in Season 4 of Criminal Case, where she serves as the Ravenedge Police Department's Homicide Detective.

She became a suspect in the murder investigation of homeless woman Selene Mitchell in Pick One's Brain (Case #32 of A World Forgotten).

28 years old, Sienna is of Spanish descent and has brown eyes and brown hair parted to one side, adorned with a deep red peony. She also wears a deep red blouse with yellow flower patterns and sports gold earrings. She is also seen wearing a necklace with a small ruby attached.

Formerly trained in the police academy, Sienna is known to be flirtatious and seductive, using her wiles to make her way in the world. She is known to be intelligent and tactical but also caring for those around her. Despite her distant demeanour, she is devoted to the Ravenedge Police Department.

Notable Events of A World Forgotten

The Ghost in the Machine

For Your Eyes Only

The Faint of Heart

Final Nail in the Coffin

Bat Out of Hell

The player may choose Sienna to join the investigation of each crime scene (in which she partners with the player) and provide hint bonuses. She is available as a 1-hint, level-10 partner. 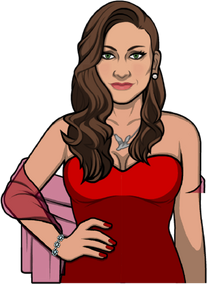 Full view of Sienna.
Add a photo to this gallery

Retrieved from "https://criminal-case-official-fanfiction.fandom.com/wiki/Sienna_Everett?oldid=221151"
Community content is available under CC-BY-SA unless otherwise noted.