Start a Wiki
Shannon Rosales, appearing a recurring character in Season 1 in Criminal Case, was the victim in Death of The Century (Case #60 of Waterborough), prior to which she has appeared as a suspect in the murder investigations of ten people in Waterborough in addition to appearing as a quasi-suspect in seven cases

Murder at the Docks

Deal with the Devil

No Justice for Learning

What You Made Me Do

Courtney and the player found Shannon scalped at the construction site in the woods with the words "YOU ARE NEXT" carved into her chest. Since Jonathan was fired, they sent her body to Devon, who found traces of abietic acid and gold on the exposed bone in Shannon's skull. Nathan reasoned that the two substances were components of rosin, a substance used on bowed instruments. From the shade of the rosin, Devon deduced that the killer played the violin. Later, Devon found gold dust on Shannon's clothes, meaning that she was killed in an illicit gold mine in the city.

Later, in the excavation site, the team found the victim's scalp, which contained pink hairs coming from Cathy King, so the team arrested her as a serious suspect in the investigation. They then found a bloody dagger in the gold mine. Grace confirmed that the blood on the dagger was Shannon's (making it the murder weapon) and found that the hair on it was gray, meaning that the killer had gray hair. 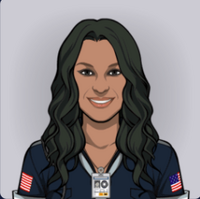 Courtney Martinez, Shannon's cousin
Add a photo to this gallery
Retrieved from "https://criminal-case-official-fanfiction.fandom.com/wiki/Shannon_Rosales?oldid=229575"
Community content is available under CC-BY-SA unless otherwise noted.