Start a Wiki
Shane Adams (1988-2019) was a suspect in the murder investigations of five people. Prior to that he appeared as a quasi-suspect in A Conspiracy of Silence (Case #3 of Venusville).

Shane was a 31-year-old conspiracy theorist with short red hair and green eyes. He had a beard and mustache and wore a blue jacket with white shirt under it.

In his third appearence, he wore a gold chinesse dragon brooch.

In his fourth appearence, he ditched his gold chinesse dragon brooch and he had a rash on his left cheek.

In his fifth appearence, he had scratches on his forehead.

With a Light Heart

The End is Near 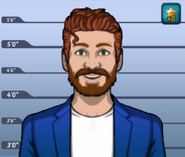 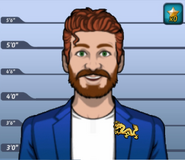 Shane, as he appeared in With a Light Heart (Case #25 of Venusville). 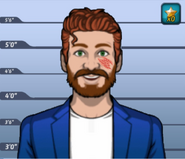 Shane, as he appeared in Brink of Disaster (Case #30 of Venusville). 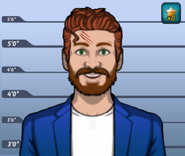 Shane, as he appeared in An Icy Inferno (Case #60 of Venusville).
Add a photo to this gallery
Retrieved from "https://criminal-case-official-fanfiction.fandom.com/wiki/Shane_Adams?oldid=192977"
Community content is available under CC-BY-SA unless otherwise noted.