Seamus Walsh is the killer of his ex-girlfriend, bartender Jennifer McCarthy, in Hit the Sack (Case #2 of Pheadmouth).

Seamus is a 27-year-old construction worker with short ginger hair and brown eyes. He wears a red-white sports jacket with a black tie. It is known that he drinks lemonade, eats caviar and knows Latin.

Seamus was interrogated for the first time after the team matched his profile with the description Father Mullen gave to the player. He said that Jennifer told him that she is single and want to try again with him.

When the team questioned him again after analyses confirmed that he filled restriction order against the victim, he said that she was too obsessive with him, following him everywhere he could go.

Later when he was incarcerated for the murder he said that she wanted him dead because recently his rich unmarried uncle died and leaving him al his fortune. He said that one day he heard her calling someone and prepare an "accidental" death for him. After her shift, he followed her and when they came to the Alley he pushed her against trashcans and starting hitting her with the sack. Judge Park sentenced him to 25 years in jail. 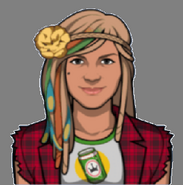 Jennifer McCarthy, Seamus' late ex-girlfriend.
Add a photo to this gallery
Retrieved from "https://criminal-case-official-fanfiction.fandom.com/wiki/Seamus_Walsh?oldid=123988"
Community content is available under CC-BY-SA unless otherwise noted.