Start a Wiki
Seamus O'Neill was the suspect in the murder investigations of media tycoon George Buchanan in Branding on My Heart (Case #2 of Back to Past) and his friend,Irish farmer Colum O'Callaghan in In the Act of Nature (Case #5 of Back to Past)

Seamus is a 27-year-old dock worker. He has thick brown hair and donns a dark blue shirt with the buttons undone underneath two brown suspenders, and is carrying a brown sack over his right shoulder.

Seamus was interrogated after team found his DNA on victim's bag.He said that George was almost always on the docks with his co-workers interviewing dock workers for some reason.One time he forgot his bag so Seamus kept it waiting for George to return it.

Seamus was spoken to again after team found Irish flag covered in Seamus and George's sweat.Seamus said that he was homeless for few weeks and he used that flag to cover himself during cold nights.One time,it was gone missing and he was upset because that was his mother's gift to him.Later on,he found George drunks with his flag.Seamus was angry because that was only thing he kept from his mom.

Seamus was proven to be innocent after team arrested Norah Barnlow for a murder.

In the Act of Nature

Seamus became a suspect for second time after team found his diary on crime scene.He said that only his friend Colum had access to it,so he probably took it.When team told him that Colum has been murdered,Seamus was shocked to hear that and he was really upset.

Seamus was interrogated again after team found big amounts of corn Seamus gave to Colum.He said that Colum saw Seamus robbing his neighbour's house because he needed money to escape Lindordia and to go back to Ireland.Since Colum saw him,Seamus tried to shut him up with a big amounts of corn he had,but that didn't worked.

Seamus was found innocent for 2nd time after team arrested Marvin Ferrari for a murder. 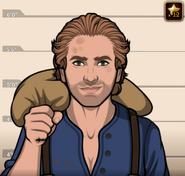 Seamus, as he appeared in Branding on My Heart (Case #2 of Back to Past). 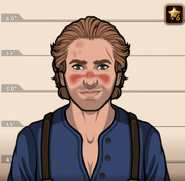 Seamus, as he appeared in In the Act of Nature (Case #4 of Back to Past).
Add a photo to this gallery
Retrieved from "https://criminal-case-official-fanfiction.fandom.com/wiki/Seamus_O%27Neill_(BTP)?oldid=107737"
Community content is available under CC-BY-SA unless otherwise noted.