Scott Walker was one of the suspects during the murder investigation of Arnold Young's former apprentice named Roger Armstrong in On the Chopping Block (Case #21) and a priest named Ezekiel Green in Tears of Blood (Case #24).

Scott is a 27-year old hacker who has bright blue eyes and a brown fashion hairstyle which has some blue streaks in it. He sports a small scar near his right eye and always wears a bone brooch.

In Come Hell or High Water, Scott wears a black and grey striped cardigan with a few buttons on the left side of it. Underneath the cardigan is a light brown shirt. It's noted that Scott smokes and is left-handed.

In Tears of Blood, Scott wears a beige jacket with black laces, along with a blue sweater underneath it which has white vertical stripes.

Scott is a hacker who was friends with Douglas Benson until he ratted him out to the police during a large computerized banking heist, according to Douglas.

On the Chopping Block

Scott found himself in the red when the team found a tablet near one of Twilight Town's lakes. Douglas analyzed the tablet and discovered that it belonged to Scott. Douglas got furious with Scott because he was trying to get Roger to finish Douglas's job two years ago which was on the tablet. Douglas managed to pinpoint Scott's location and wanted to chat with him. Scott was glad to see Douglas again after two years. Douglas insulted Scott and asked why he was trying to get Roger to do his job at robbing the banks. Scott denied everything but when Douglas showed Scott the tablet, all the info on it was gone. It mysteriously vanished. Douglas pulled out the mysterious laptop from Blood and Iron and the threat that Scott sent to him vanished as well. Scott tells Douglas that he doesn't have any proof that he was the one who organized the heist. Douglas got infuriated and warned Scott that he will have the evidence to put him behind bars.

Scott was interrogated by the player and Douglas a second time when he analyzed Roger's laptop which had several messages on his Friendline wall, stating that someone was stalking him. Scott demanded money for his protection and they went through with the agreement. Scott reiterates that the team has no proof that he has never extorted or done any illegal activities by using his hacking expertise. Douglas, once again, shows Scott Roger's laptop but once again, the info was gone. Douglas thinks Scott hacked into Roger's laptop and hid the evidence before they interrogated him. The same went for the tablets. Scott thinks Douglas is just tired and is letting his personal vendetta get to the best of him. Douglas insults Scott again and asks him to leave him alone. 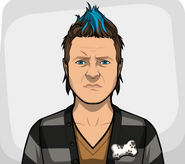 Scott, as he appeared in On the Chopping Block (Case #21). 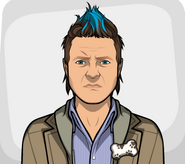 Scott, as he appeared in Tears of Blood (Case #24).
Add a photo to this gallery
Retrieved from "https://criminal-case-official-fanfiction.fandom.com/wiki/Scott_Walker?oldid=10288"
Community content is available under CC-BY-SA unless otherwise noted.