Roderick "Rodney" Scott Jones, appearing as a main character in Season 6 of Criminal Case, is the Inspector-Bounty Hunter of the Supernova Squad Corps, working alongside the player as partners throughout season.

At age of 33, Scott has dark blue eyes with turquoise around his eyes and sport dark red spiky necklengh hair with bangs with brown spots on bangs and three spiky points. He wears dark red jacket (or coat during notable cases) with brown belt and brown shoulder on left side. Under the jacket, Scott wears a short-sleeved white shirt. He also wears one brown glove, worth a pair of black pants with a leather belt of the same color and a pair of brown jet boots can ability to fly. Scott even he wears earphone on his left ear which turned his head into a helmet.

Scott was born as son of David Jones and Naomy King. Like his parent did, Scott met th player in first place.

Covering his both ears 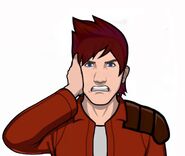 Covering one ear
Add a photo to this gallery
Retrieved from "https://criminal-case-official-fanfiction.fandom.com/wiki/Scott_Jones?oldid=227626"
Community content is available under CC-BY-SA unless otherwise noted.