Scare-Crowe is a case featured in Criminal Case. It takes place in the Old Valley district of Grimsdale.

Diego and Hamilton, went to a stroll in Old Valley, and while passing near some abandoned farm, a girl ran up to them screaming saying someone killed her friend and turned him into a scarecrow.

The girl led them to the farm where they found exactly what she described, and she identified the victim as Steven Crowe, an infamous pagan cult leader in Old Valley, and she introduced herself as Ophelia Lincoln, one of his followers. The team later on discovered two more suspects, victim’s friend- Elvira Milton, and a bartender called Simon Armstrong. After speaking to them Diego and Hamilton stopped at a graveyard, where they heard crying sounds.

Hamilton and Diego entered the graveyard, where they saw Hamida crying behind some bushes, when asked why is she crying, she confirmed it isn’t because of a dead relative or friend of some sort, but would rather stay silent, she then questioned them if they found anything about The Virgin Slayer, where they revealed they are investigating the murder of Steven Crowe. Hamida suggested the team to investigate the graveyard, as the cult do most of their rituals there.

The team then suspected, local junkie- Tom Blackwater, and Hasuro’s friend- Adolfo Arias. While they went to the crime scene, a rock hit Diego’s head.

Hamilton and Diego went to see where the rock came from, where they saw Ophelia hiding behind Elvira, who is throwing rocks at Adolfo telling him to leave Ophelia alone. Diego questioned the situation, where Adolfo revealed he is doing his own investigation on the Virgin Slayer, and thought it was a good idea to question Ophelia, as she was one of the girls raped by the slayer, but managed to get away before they killed her. Shocked by the discovery the team decided to speak to Ophelia and Adolfo. They later on found enough evidence to arrest Simon Armstrong.

Simon was confronted with the evidence leading him to admit to the murder. He revealed that he killed Steven because he is certain that he was the Virgin Slayer. Diego asked Simon what made him suspect Steven, where Simon explained everything. He told them about a girl named Kimberly Sussex who was investigating the case, she’ve been doing research on the victims, and suspected that the slayer targeted virgins, who worship the greek gods and goddesses, as the first known victim, Ada Wadsworth was openly a pagan, and two of her friends, Morgan Goodwin, and Emily Leigh were followers of Steven’s cult, and both were killed by the slayer. Kimberly wasn’t one hundred percent sure on her theory until, Cherami Gilbert, a girl from a Jewish family was killed by the slayer, one week after running away from her household and converted to paganism. After the discovery, Kimberly went straight to Simon and his beau, and told them about it, and that she suspects Steven was the slayer, which they didn’t take seriously, and then she started warning pagan girls about the slayer. A week later, Kimberly was found dead and was killed in the same method the slayer used, however, she was still fully dressed. Simon immediately knew that the slayer must’ve killed Kimberly due to her discovery, but didn’t rape her to leave it as a warning for anyone who tries to search for them. Simon tried to tell the girls in Steven’s cult that Steven may be the killer, but they refused to leave paganism. Simon was stressed out, as he was certain tht Steven is behind all this, and he couldn’t let him hurt his fiancée & their unborn child, Ophelia, Elvira, or any other woman, and so he decided to kill Steven, and in case if Steven wasn’t really the slayer, he turned him into a scarecrow to leave a warning on however is the real slayer. Judge Powell sentenced him to 7 years in prison. 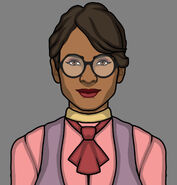 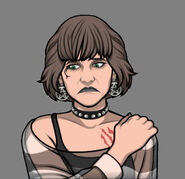 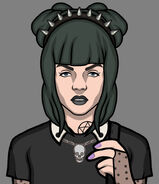 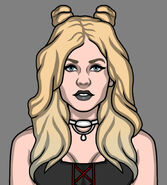 Kimberly Sussex
Add a photo to this gallery

After the arrest, Tom Blackwater came into the station asking to speak to Hamilton and Diego. Hamida then went to speak to Jones asking to speak to him about something personal. Out of curiosity Mia asked Hamilton to eavesdrop at Jones and Hamida’s conversation, to see what their talking about.

While Hamilton was eavesdropping, he heard Hamida telling Jones that she met his ex-wife in the university district, and so he may know how to help her. She them asked him what would he do, if someone stopped loving him. Jones figured out that Hamida must have went through a breakup, and sympathized with her, but didn’t know how he could help her. Hamilton told Mia everything and she felt sorry for Hamida. When suddenly Elvira came to the station asking for help.

Elvira told Hamilton and Mia that she lost her bag in the graveyard, and asked if they could find it. After finding the bag, Mia suggested to rummage through it, where they saw 4 tickets for a concert featuring two famous popstars: Lana Martyn and Dorothy Miller. They gave the bag to Elvira, who realized they were interested in the tickets, and gave them 3 of hers, as those three were meant for Steven, Simon, and Ophelia who wasn’t in the state to go to a concert.

Mia and Hamilton went to Hamida, and showed her the tickets, and offered her to come with them to cheer her up. At first she turned them down, but the moment she heard that those popstars she never heard of were famous, she accepted.

Hamilton and Diego went to speak to Tom. Tom told them that he saw a man taking inappropriate pictures on ladies at the bar, while investigating, they found a broken camera. After fixing it and unlocking it, they sent it to Clay, who revealed it belongs to Gregory Lynn, Adrian Lynn’s brother. They went to speak to Gregory, who revealed that he took these pictures to sell them for money and not out of lust, leading to them to fine him.

After dealing with everything, Elvira came to speak to Hamilton and Diego. She told them that she refuses to believe that Steven is the slayer, and is planning to do a ritual to make Ophelia remember who the slayer is, but needs orchids for the ritual. They investigated the farm, where they found some flowers, they sent it to Yoyo, who revealed those flowers are indeed orchids. The team then went to speak to Ophelia, and with the help of Elvira pulled the ritual, Ophelia revealed that the slayer is indeed not Steven, she was then told to reveal something about the slayer, until she freaked out, and so the team stopped the ritual. The team went to inform Simon that Steven is not the slayer.

After the events, Mia and the player went to the subways, where they were met by Hamida, and they went into the train to go to the concert.

Adolfo Arias.
Add a photo to this gallery

Gregory Lynn (GD)
Add a photo to this gallery

Retrieved from "https://criminal-case-official-fanfiction.fandom.com/wiki/Scare-Crowe?oldid=167983"
Community content is available under CC-BY-SA unless otherwise noted.