Savannah Blake was a quasi-suspect in Hook Me Up (Case #2 of Grimsdale), and Burn in Hell! (Case #11 of Grimsdale). She later got killed in Hoe Painful was her Death? (Case #22 of Grimsdale)

Diego and Hamilton went into Rosie’s garden, after she have reported seeing Savannah’s dead body here. The duo sent her body to autopsy, where Hasuro confirmed that the killer plough her body with a gardening hoe, and he also found traces of vegan cheese on her body.

When confronted about it, Brooke announced that she killed Savannah because she cheated on ‘her’ Bruno. She revealed that when Savannah brought Bruno into their home for the first time, Brooke fell in love with his exotic appearance, and hated Savannah for winning such a catch. When she discovered that Bruno broke up with Savannah, she was sitting on top of the world, but was also curious of why he’d dump Savannah. It wasn’t until yesterday she discovered that Savannah cheated on him, and that angered her, she didn’t care if Savannah was still with him or not, but she didn’t like the fact she’d hurt him at all, and so decided to kill Savannah. Brooke was sentenced to life in prison for domestic homicide.

After Bruno won his match with Kelemen. He introduced Savannah as his girlfriend, where she asked the player and Bruno if they can find her necklace which she lost in the skating area of the school.

Bruno and the player found her necklace, and gave it to her. She was thankful to them, that she gave Bruno a kiss in the lips. Bruno then asked the player if he can give them some space.

After the killer was arrested, a girl named Rosie told the team that Bruno went missing, and that she saw him walk past her angry, and his face was filled with dried tears, leading to Mia and the player to go search for him. They eventually found Savannah’s phone, where Clay found out that she had cheated on Bruno. Mia and the player confronted for breaking Bruno’s heart. 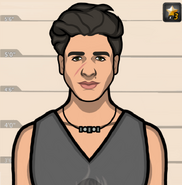 Marshall Long, Savannah’s step-father
Add a photo to this gallery
Retrieved from "https://criminal-case-official-fanfiction.fandom.com/wiki/Savannah_Blake_(Grimsdale)?oldid=207609"
Community content is available under CC-BY-SA unless otherwise noted.