Savannah is a 32-year-old actress. She has black shoulder-length hair and green eyes and sports deep red lipstick, plum eyeshadow, and blush.She wears a white dress with a green and orange leaf pattern. Additionally, she sports gold earrings, gold necklaces, and a white flower in her hair.

In her first and second suspect appearence, she wears a dark blue dress with white flowers.

In her fourth suspect appearence, she wears a green dress.

All Bets are Off

No Prey, No Pay 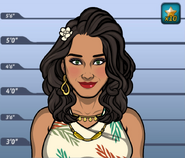 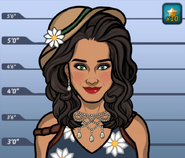 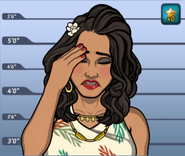 Savannah, as she appeared in Chip and Charge (Case #45 of Venusville). 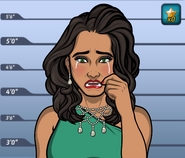 Savannah, as she appeared in Waste of Breath (Case #46 of Venusville).
Add a photo to this gallery
Retrieved from "https://criminal-case-official-fanfiction.fandom.com/wiki/Savannah_Blake?oldid=191928"
Community content is available under CC-BY-SA unless otherwise noted.