Sara Kingson was the victim in See No Murder, Hear No Murder, Speak No Murder (Case #9 of Parinaita).

Sara was found dead at Jack Lambari workshop with her ears, mouth and eyes cut away from her body. The team were creeped out by the murder.

The killer turned out to be Dockents's family member and the victim's girlfriend, Arron Dockents.

"When brought in by the police. Arron demanded to know what was going on, The police accused him of the murder but he denied it fully. When the police pushed Arron to the breaking point. He screamed and announced that the "Blasted police" were correct. He revealed that he murdered Sara because she knew information about the cold case the police was investigating and wanted it to stay quiet. He revealed that he had kept files on the cold case for years but he didn't expect his girlfriend to look into them at all! He then manipulated her to come to the workshop for some "Fun". He then laughed evilly when he went into the grim details of how he cut her up and made sure she would NEVER reveal the details about the death of "Warren Knowledge!". When he realised he said the victim's name, he was angry with himself and demanded to be locked up, which the police were delighted to approve of." 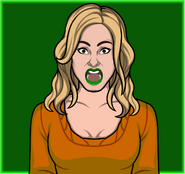 Sara Kingson, as she appeared in See No Murder, Hear No Murder, Speak No Murder 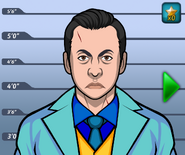 Arron Dockents, Sara's boyfriend and killer.
Add a photo to this gallery

Retrieved from "https://criminal-case-official-fanfiction.fandom.com/wiki/Sara_Kingson?oldid=151789"
Community content is available under CC-BY-SA unless otherwise noted.