Sandale was found in his office with a massive cuts around his body, the murder weapon wasn't on the crime scene but soon found out that it was fire whip.

The killer turned out to be business man, Scar Fredricks

" He then sighed and admitted that he did it because Sandale murdered his brother, Garlic Fredricks, after one of his "fails experiments" into time travel. He revealed that Sandale never apologize for the murder or ever tried to get him back. He revealed that he stole the crystals in hopes of stopping his brother from dying or doing any stupid for the man. Scar then revealed that the victim found him trying to take the crystals for himself. He tries to explain his reasons but Sandale just didn't care and started to threaten to call the police. In a split second of rage because of Scar's brother's murder and the fact that Sandale never seemed to change, he whipped him hard with the fire whip and Sandale screamed in pain. Again and again, he did it, He wanted revenge and death for the man who murdered his brother. He them pulled him into his office and left the building. He revealed that he set of the death fire because of the team getting too close to him, but he didn't expect anyone to stop it." 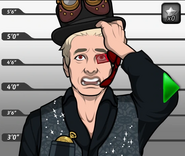 Sandale, as he appeared in Trapped in With the Killer! 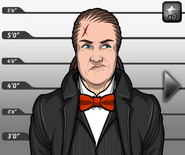 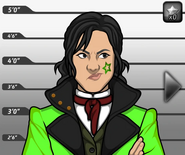 May Olia, Sandale's disowned daughter
Add a photo to this gallery

Retrieved from "https://criminal-case-official-fanfiction.fandom.com/wiki/Sandale_Clock?oldid=183801"
Community content is available under CC-BY-SA unless otherwise noted.