Lord Samuel Waldorf-Ridgewood is a main character featured in Season 1 of Criminal Case, where he serves as the Concordian Flying Squad's Consultant.

He became a suspect in the murder investigation of wealthy youth Charles Wilson in A Run for Your Money (Case #6 of The Mystery Continues).

Samuel is a 37-year-old gentleman. He has short brown hair, mutton chops, and a mustache. He wears a beige vest and a white collared shirt with a tie underneath a red and olive green coat with a beige handkerchief in his pocket. Additionally, he wears a red deerstalking cap with a dark brown ribbon and is seen holding a pipe.

Notable Events of The Mystery Continues

Samuel first encountered the player while analysing a brain diagram found in Viola's lab. Samuel greeted the player before trying to feel their skull shape. After being snapped at by Maddie, Samuel confirmed that the diagram belonged to Viola's co-worker Vincent Saunders who was researching the effect of medicines on the temporal lobe.

A Run for Your Money

As the Consultant of the Concordian Flying Squad, Samuel's responsibilities centered around performing forgeries and analyzing handwriting and messages whenever necessary. He informs the team of the results of his analyses after a certain amount of time or a speed-up process using Criminal Case Cash. His task-wait rates vary depending on the difficulty of the task, but they all cost 1 Criminal Case Cash per 30 minutes.

Below is a list of analyses Samuel has performed throughout the course of the game:

The player may choose Samuel to join the investigation of each crime scene and provide hint bonuses. He is available as a 3-hint, level-10 partner. 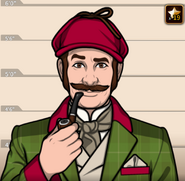 Samuel, as he appeared in A Run for Your Money (Case #6 of The Mystery Continues). 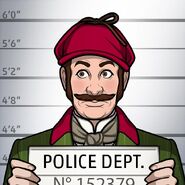 Add a photo to this gallery
Retrieved from "https://criminal-case-official-fanfiction.fandom.com/wiki/Samuel_Waldorf-Ridgewood?oldid=93681"
Community content is available under CC-BY-SA unless otherwise noted.