Sam De Witt was a suspect in the murder investigations of movie director Paula McGee in The Forest Game (Case #40 of Laroy Bay) and animal wrangler Mindy DuBray in To the West! (Case #8 of Return to Laroy Bay).

Sam is 24-year-old actress and University student. She has long brown hair, brown eyes, and a mole above her right cheekbone. She wears a blue shirt under a gray tracksuit jacket, blue denim jeans, and black shoes. She also wears a silver necklace with a blue jewel.

Sam was spoken to after team found her diary on crime scene.She said that she was an actress in this movie and she wrote everything in that diary,from trash talking Paula McGee to her crushing on Josip Filipovich.Team told her that Paula is dead,but she said that she was a evil bitch and that she deserved it.

Later on,Sam was exposed as Gillenati member.Team told Sam that they know about her relationship with the cult,causing her to panic.Team asked her about London's plans,but Sam said that she won't reveal anything because she might end up as Grayson Tatum.She also claimed that she wants to leave Gillenati.

Sam was found to be innocent after team arrested Josip Filipovich for murder. 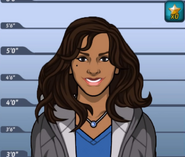 Sam, as she appeared in The Forest Game (Case #40 of Laroy Bay). 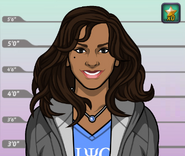 Sam, as she appeared in To the West! (Case #8 of Return to Laroy Bay).
Add a photo to this gallery
Retrieved from "https://criminal-case-official-fanfiction.fandom.com/wiki/Sam_De_Witt?oldid=222455"
Community content is available under CC-BY-SA unless otherwise noted.