Ryker Hawthorne, appearing as a main character in Season 1 of Criminal Case, is a detective working with the Nyctochral Police Department as one of the player's two primary partners throughout the season.

Hailing from Edmonton, Alberta, Canada, Ryker is a 38-year-old detective of the Nyctochral Police Department who is assigned to be one of the two partners for the player's career in the Nyctochral Police Force and worked as a marine prior to his tenure in the department. Ryker has brown hair in a caesar cut hairstyle and has blue eyes concealed behind a pair of black silhouette sunglasses. He also has a small scar near his right eye and wears the Nyctochral PD badge around his neck. Ryker wears a camo shirt with an unbuttoned black jacket over it with brown suspenders and a walkie-talkie. Other than that, he wears a silver army cap badge pinned to his left.

It is known that Ryker's favorite animal is a chameleon and his favorite food is nachos with beer. He is also known to be sensitive when it comes to certain topics and issues, and comes off as a tough guy but on the inside, he's a kind person. Additionally, he owns a pet chameleon.

The player may choose Ryker to join the investigation of each crime scene (in any Nyctochral case he teamed up with the player) and provide hint bonuses. He is available as a 1-hint, level-10 partner. 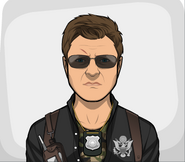 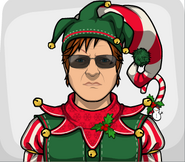 Ryker's Halloween costume in All Nightmare Long (Case #1).
Add a photo to this gallery

Retrieved from "https://criminal-case-official-fanfiction.fandom.com/wiki/Ryker_Hawthorne?oldid=44153"
Community content is available under CC-BY-SA unless otherwise noted.