Start a Wiki
Ruth Flanagan was a suspect in the murder investigation of Irish farmer Colum O'Callaghan in In the Act of Nature (Case #5 of Back to Past) and aristocrat Aila Shropshire in Like a Thief in the Night (Case #6 of Back to Past).Prior that she appeared as a quasi-suspect in Branding on My Heart (Case #2 of Back to Past)

Ruth is 21-year-old gang leader with long messy brown hair and brown eyes.She wears white shirt under green vest and has multiple tattoos on her chest.She also has deep scar on her face and a mole.

Team went to speak with Justice Corps member Bill Beaty about someone burning the bank.Bill denied these accusations and blamed Irish Gang for it because they were accussed of numerous vandalism acts.One of their leaders,Ruth Flanagan said that Irish Gang did vandalism before having her family as the leaders,but now they aren't doing that and Bill is obviously lying

In the Act of Nature

Ruth became a suspect into Colum's murder investigation after team found her flyer with moonshine bottles on Cattle Market .She said that she has been there to convince Colum into joining the Irish Gang,but he refused again.

Ruth was spoken to again after team found a threat she wrote to him.She said that he was the one who reported Irish Gang's robberies 2 years ago,making Ruth's brother arrested.

Ruth became a suspect after team found picture of her and Aila.She said that Aila helped her family in hard times and that Irish Gang promised her that they will keep her safe.But since Aila is killed,Ruth said that she will choke a person who killed her.

Ruth was spoken to again after team found her fingerprints on Aila's necklace.She said that Aila forgot it on a local marketplace so she tried to return it. 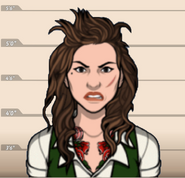 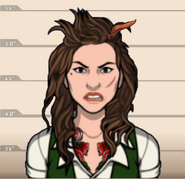 Ruth, as she appeared in Like a Thief in the Night (Case #6 of Back to Past).
Add a photo to this gallery
Retrieved from "https://criminal-case-official-fanfiction.fandom.com/wiki/Ruth_Flanagan?oldid=108269"
Community content is available under CC-BY-SA unless otherwise noted.