Run, But You Can’t Hide is a case featured in Criminal Case. It takes place in the Saint Teufel district of Grimsdale.

After Ophelia found Mia and Hasuro, she helped them up and decided to take them to her hideout. First she stopped at an area in the to yell for her partner, but didn’t get a call back. Mia and Hasuro decided to help and when they searched the forest, they were surprised at seeing the dead body of Steve Liveman, the Anoterous leader.

Ophelia came to see what’s the fuss about, where she recognized Steve, revealing that he was the one searching the forest with her for any refugees. She then took the duo to the waterfall (A.K.A. The Anoterous hideout), where they saw Susan Willoughby waiting for them, a girl who Ophelia came with from Graecita, a city formed by Greek demigods and mist-seekers, after they won the Titan war. After being brought to the hideout, Ophelia took the duo to Kelemen, who Mia wasn’t happy in seeing, and when Ophelia told him what happened, Kelemen told Mia and Hasuro to investigate the murder, giving them permission to look at the base.

The first thing Mia and Hasuro did was add Ophelia to the suspect list, and investigate both the base and the crime scene again. When looking at the base, the duo found reasons to suspect both Kelemen and an Anoterous agent called Jesse McAlpine. When discussing the case with Kelemen, an Iris message from no other than Grimsdale’s ruler, Galinda Singh, appeared.

Galinda told the three she heard of what happened to the Anoterous agent, and that she was pissed off, not because of his death but because she didn’t get to be the one to kill him and demanded that they show the killer to her after finding them, to punish them for “humiliating her”, and maybe she’ll consider not sending troops to Old Valley to find out where’s the base at. After getting the message, Ophelia approached the duo and told them she thinks she spotted someone in the ruins of a cottage that burned ten months ago. After searching the cottage, the duo were shocked to learn the person hiding there was Rozetta Pierre and the 3 started celebrating the reunion. Mia and Hasuro then returned to the investigation in which they found out that Ophelia was growing tired of Steve asking her questions about how Graecita is like and that Jesse was sick of Steve underestimating and underusing him due to how young and short he looks. The duo then received an Iris message from Rozetta who told them that she’s still at the cottage and that there are Anoterous agents hunting her, thinking she killed Steve.

Mia and Hasuro went to the cottage, taking Kelemen with them, who threatened the Anoterous to stop. Mia and Hasuro then continued where they were left at, where they discovered that Rozetta was instructed by Mayor Cardwell to assassinate Liveman, as having The New Olympians rule the city was already bad enough. They also found out that Galinda was not only a godly-sister of Steve’s, but also his stepdaughter whom he cared about unrequitedly, and that he fought with Kelemen, after learning that he was making plans to assassinate her, even though it’s highly impossible. The duo then found enough evidence to arrest Jesse McAlpine for the murder.

Jesse told Mia and Hasuro that he was actually in love with Galinda, due to her beauty, intelligence and confidence, all of which are qualities he looked for in a woman, and that he really wanted her to love him back, but knew he had no chance due to him being an Anoteros and his babyface. Jesse then thought, if he killed Steve, she’s go crazy for him and give him a chance, so when Ophelia and Steve left, he followed them, waited until Ophelia is out of sight, where he pushes Steve into pointy tree branches, killing him by impalement. The duo Iris-messaged Galinda, who laughed at Jesse for thinking a boy like him would manage to satisfy her, and decided that since the Anoterous won’t be fans of Jesse’s reasons, they’ll probably punish him, a similar or worse way than Galinda intended to. And she was right, as after being presented to he Anoterous, the duo, Rozetta, Ophelia, Kelemen, Vladimira and Susan heard gunshots coming from behind the walls.

After finding Steve’s killer, Kelemen came to Mia and Rozetta to tell them that he wants to talk to them. Ophelia then came up to Mia, to tell her that she needs her help.

Mia and Rozetta went to talk to Kelemen, who told them that although Galinda promised that she won’t be sending troops to Old Valley’s woods, he doesn’t trust her worlds and believe that the Anoterous must migrate at once. However, there are fifty people in the base, some off which are roaming outside the woods, so it would be difficult to gather everyone for an announcement and the power at the base went off, and so he would like for them to turn it back on to set off an alarm, as all the Hephaestus children in the Anoterous were arrested already. Mia and Rozetta searched the base, where they found an electric box, which after inlocking, Rozetta spend time on the mechanism and managed to turn the power back on. Mia and Rozetta then spoke to Kelemen who was grateful for their help, and set off the alarm to bring all the Anoterous agents in one place.

YOU ARE NOT MIA

Mia went to speak to Ophelia. Ophelia explained that when she was roaming around the woods, she saw two people who she didn’t recognize in the base, and believes they could either be refugees who need help, a part of a group which could help them or what Ophelia fears, soldiers sent here by the orders of Galinda. Mia and Ophelia abandoned this idea, and searched the forest where they found a pile of twigs, which after searching they found a bead necklace. Mia immediately recognizes the necklace as the same one she was wearing, a necklace Hamida only gifted to one other person beside her. Joyfully, Mia turned around, where suddenly Hamilton, Bruno and Yoyo came out, probably looking for Hamilton’s necklace. Mia ran up to the three, and they all shared a group hug. Mia gave Hamilton his necklace, and after telling him how happy she is to see him, she asked him the first question that came to her mind- Where’s Diego? Hamilton looked down, and back to Mia, and told her that he, Bruno and Yoyo weren’t with Diego, Sploder, Randall and David when all this started, and when they refugees along with many others from Grimsdale to Saint Teufel, where they built a barricade to protect themselves from the Galinda, Marisol, Clay ans Skye, who haven’t reached their full power yet, they didn’t find them there and that he thinks they could either be imprisoned or much worse, dead. Mia didn’t like what she heard, but she was grateful to have Hamilton, Bruno and Yoyo around at least.

After helping Kelemen and finding Hamilton, Bruno and Yoyo. Everyone came to the Anoterous base, where Hamilton was pissed at seeing Kelemen, and returned him a punch in the groin, which Kelemen gave him back at the airport. After Kelemen’s pain wear off, he came before the people at the base, and informed them that Galinda is aware of the fact that the Anoterous base is somewhere in Old Valley’s woods and that they have to leave before she sends troops there. After he finished the speech, Ophelia and Susan came to Kelemen and asked him where they will be going, where Mia suggested that they go to the Saint Tuefel Resistance camp, which the people of Grimsdale set up. In that moment, Hamilton stepped in and told her they cannot accept having public enemies like the Anoterous and Kelemen into the camp. Mia was shocked when she heard that and was going to rant, but Kelemen stopped her, and told her they can handle things in their own. When Hamilton asked Ophelia, Vladimira and Susan if they want to come, Ophelia gave him a disgusted glare, and told him she and Susan were sent there to rescue demigods and there was no point in going to Saint Teufel if he wasn’t going to allow any demigod there.

Mia was still angry at Hamilton for not allowing Kelemen or the Anoterous to come with them, but she knew she had no where else to go, so she, Hasuro and Rozetta went out the base, and started following Hamilton, Bruno and Yoyo all the way to a car, which they entered, and Bruno started driving them all the way to Saint Teufel.

Rozetta Pierre (GD)
Add a photo to this gallery

Hamilton Laurent
Add a photo to this gallery 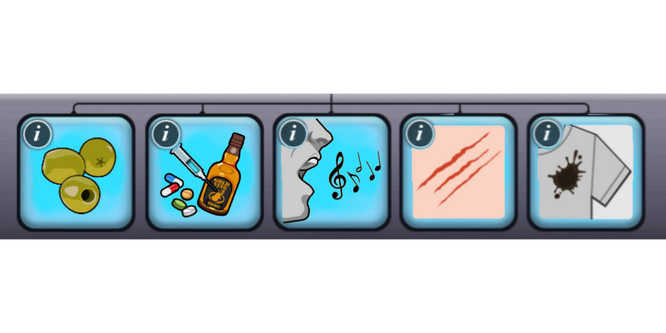 Retrieved from "https://criminal-case-official-fanfiction.fandom.com/wiki/Run,_But_You_Can%E2%80%99t_Hide?oldid=208070"
Community content is available under CC-BY-SA unless otherwise noted.