During the events in season 1, she was a partner in A Xerdan Death (Case #34 of Grimsdale), and was assigned to work under the GDPD as a tech-expect during What a Way to Start!, after the previous one was revealed to be a New Olympian.

Rozetta is seen in this case constantly basing the actors for their horrible job. And observing Mia and the player playing the game.

After the duo caught the “killer”, at night she is seen taking off her blue wig, and her makeup, and changing into a Xerdan dress, where she goes down into a meeting room, where she spoke to Athena, Charles Rayman, and Joe Warren, about them telling them they would be the perfect agents to help take down a criminal organization of demigods called “The Anoterous”.

Rozetta is seen in this case constantly calming down Charles Rayman whenever he flips out.

Mia and Hamilton went to speak with Penelope. However, they were met by another hooker instead, who told them that “Emma” was outside. They searched the waiting room, where they saw her purse, which they searched and found her phone. The duo unlocked the phone and gave it to Clay, who told them, she got a text from Rozetta Pierre to meet her in the DreamLife dome. The duo went there, where a security guard led them to Penelope and Rozetta. Penelope and Rozetta were shocked by their presence. Mia begged them both to help them throughout the investigation, since they really want to catch The Anoterous agent who was responsible for the murders in this district. Rozetta hesitated, but then saw there is no point in refusing, and told Penelope that from now on, any information, she has from the agent in this district.

Rozetta was seen with Diego, after he shot Gilly on the forehead, taking away the effects of charm-speak on Hamilton, saving Mia’s life. When Diego was about to argue with Hamilton, she stopped him and told him that he had no control on his body, and told the three officers to go upstairs and gather the station.

After gathering the officers gathered the station. She came up, took off her wig, and put something on her face, giving her a different face: Her true face. And she revealed her true identity, as Rozetta of Xerda, and that Penelope was her sister. After revealing her identity, she told Diego and Hamilton to Investigate the sniping area, where they found Gilly’s phone and send it to Clay and her. After learning that Hyrum was an ex-Anoterous member, she told the duo to speak with him.

At the end of the case, Trish revealed that Holly Hill’s Anoterous assassin, Nicki Nale, is going to assassinate Charles Rayman in his sister’s wedding. Making Rozetta worried, telling Mia and Hamilton to prepare to catch Nicki before she kills Charles.

After finding Nicki’s body, Mia and Hamilton went to speak to Rozetta. Although she didn’t condone of the murder, Rozetta was relieved that Charles is now safe.

Rozetta was spoken to again, after finding the threat she sent to the victim, for flirting with Charles. Rozetta told them that Charles told her that Nicki was annoying him, by constantly sending him flirty texts, angering Rozetta. She was even more angered, after finding out that Nicki was sending these, thinking Charles would fall for her, and lure him into an area where she’d kill him.

At the middle of the investigation, Rozetta came up to them, asking if it is true that Charles is dead. When the duo confirmed to her, that Charles indeed is dead, she started crying, and then revealed to them that she last saw Charles, at the blue party offices.

She was talked to again, after learning that she was spying at the victim. She admitted, just like Joe, she suspected that Charles was hiding something, and she decided to spy on him, which she regretted, and was glad that Charles never found out.

Rozetta was found innocent, but she came to Diego and Hamilton, to discuss something with them. Diego and Hamilton went to talk to Rozetta, where she told them, that she figured out what Charles’ secret is. She then explained, that during a meeting about whether they should trust Mia and Hamilton to investigate about The Anoterous, Charles warned them, that his spies suspect that there is a greater threat than an Anoterous. Charles didn’t have proof of it, so he didn’t explain things further, but Rozetta suspects the greater threat he was talking about, are Katherine’s friends. The duo then recalled that Charles asked Penelope to spy on Polly, and that when Hamilton and Mia asked Polly about the Anoterous, she said that she left the Anoterous for the “winning side”, which isn’t the police. After hearing this, Rozetta believed what she though, even more, and asked the duo to investigate the Election podium, for something belonging to Charles. After finding a notebook, they sent it to Yoyo, who said that Charles was suspecting about the existence of group of 15-25 year old Ex-Anoterous members, that are labelled as sworn enemies to the Anoterous. The duo then decided to speak to Katherine, to know the actual reason behind killing Charles, where she told them that she didn’t lie about her motive, she just left out some parts of it. The duo then spoke to Rozetta to tell her about the results.

The duo returned to Natasha and told her that her brother safe, where she returned her part on the deal, and told them that the New Olympians, allied with a girl from a place called “Xerda”, recognizing the city’s name, the duo went to speak to Rozetta. Rozetta was shocked upon hearing that, and told the team that she’d tell two of her Xerdan friends, to sneak her and Mia into the city (since Rozetta was banished from there, due to her heterosexuality).

At sunset, Mia went into the woods with Rozetta (as Rozetta Pierre), where they met up with Johanna, Rozetta’s friend, and she gave them Xerdan dresses to wear, and led them inside a tree, which had a ladder leading to the city.

Hamilton went to see David, where David told him there were many similarities between Gail’s and Samantha’s motive and that he believes something is up. The two then went to speak to Samantha and asked her where she left her bag, which she replied she threw it at the bathhouse out of fear. The duo went there where they found Samantha’s bag, which they dug through and found her sports drink. They sent the sport drink to Sploder, who confirmed that he found the same substance that was on Gail’s whiskey. Rozetta then appeared telling them that she wants to speak to them. Rozetta asked David if he remembers the protozone case, which David confirmed he did, which was about corrupt workers in DreamLife taking advantage of the technology there to develop a substance called protozone which they could use to brainwash people. Rozetta revealed to David that the last crate of those substances has been stolen and that the substance that Sploder found was actually protozone. She them told them that although the substance was powerful, the effect only occured for ten minutes and the person drugged would remember everything that was going whilst being high, but considering the fact that Gail was drugged for half an hour and that Samantha didn’t remember what she was doing whilst being drugged, this means however stole the crates must be working on improving them so that it would be as powerful as the original workers intended for them to be and that Gail & Samantha were test-subjects for the project. After hearing everything, Jones decided that he should speak to the asylum workers to get Samantha and Gail out, when he asked Rozetta if she’d like the team to investigate this, she shakes her head saying that DreamLife security will take care of this.

Rozetta became a suspect after Cindy’s body was found in the DreamLife dome. She was spoken to again after Mia and Hamilton discovered that Norman and Cindy were aiming to steal the meteorite rock she had to prevent her from finding a cure to the effects and protozone and they decided to give her a warning.

Rozetta was found innocent, but she was asked by Chief Jones to accompany Hamilton, in order to get information from Norman on the protozone’s location.

Run, But You Can’t Hide

After getting Galinda’s message, Ophelia approached the duo and told them she thinks she spotted someone in the ruins of a cottage that burned ten months ago. After searching the cottage, the duo were shocked to learn the person hiding there was Rozetta Pierre and the 3 started celebrating the reunion. Rozetta was then added to the suspect list, where she then spoken to again after learning that Mayor Cardwell hired her to kill Steve Liveman as she thought it’s already bad enough The New Olympians got power, and last thing they need is the Anoterous roaming around.

After the killer was arrested, Kelemen assigned Rozetta with Mia to fix the base’s power, to gather up everyone in the base, to evacuate. 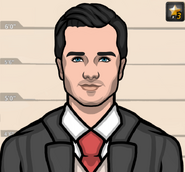 Queen Penthesilia II, Rozetta’s mother
Add a photo to this gallery
Retrieved from "https://criminal-case-official-fanfiction.fandom.com/wiki/Rozetta_Pierre_(GD)?oldid=208362"
Community content is available under CC-BY-SA unless otherwise noted.