Rozetta was the 27-year-old inventor and DJ. She had blue shoulder-length hair tied back in two buns, black eyes, and freckles. She was seen wearing a shoulderless black shirt with orange, white and yellow stripes.

In her third suspect appearence, she wore shoulderless black shirt with blue, green and yellow stripes. She also wore a pair of black-and-blue headphones as well as two cords around her neck and one blue bracelet and one green bracelet around her right wrist.

In her second quasi-suspect appearence, she sported eyebags on her face and has also ditched her headphones and the cords around her neck. Additionally, her clothes were seen torn and having oil stains.

Rozetta became a suspect after team found her IDCard underwater next to Zoe Kusama's body.She said that she lost it when she was scuba diving and that it's a shame that Zoe died.

Rozetta was spoken to again after team found picture of her and Zoe when they were younger.She said that Zoe was her nanny back then when Zoe was 16 years old and that they were in good terms.

Rozetta was spoken to again after team found out that she knew Anya Kuzmanov.Rozetta claimed that Anya showed up in her night club in disquise and stole her laptop and eventually sold it.Rozetta didn't know why.

Rozetta was interrogated after team found her headphones on crime scene.Rozetta said that she was partying on the yacht and that she doesn't know the victim.

Rozetta was interrogated again after she tried to escape custody.She said that she has meeting to go and that she planned on using Adrian's yacht.

Rozetta was found innocent after team arrested Wendy Stokes for a murder.

All Bets are Off 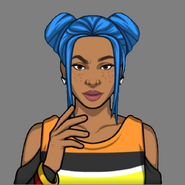 Rozetta, as she appeared in Deep Waters (Case #25 of Laroy Bay). 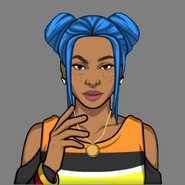 Rozetta, as she appeared in Fishing the Fishman (Case #28 of Laroy Bay). 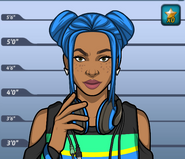 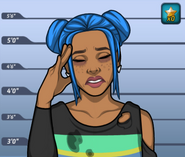 Rozetta, as she appeared in Hole in One (Case #52 of Venusville).
Add a photo to this gallery
Retrieved from "https://criminal-case-official-fanfiction.fandom.com/wiki/Rozetta_Pierre?oldid=204607"
Community content is available under CC-BY-SA unless otherwise noted.