Roger Smirnov was a suspect in the murder investigation of his son, Fairview High Student, Alexei Smirnov in All Boli Out (Case #1 of Grimsdale), and Penelope Everett in Accidents Can Happen (Case #24 of Grimsdale)

Diego and the player interrogated Roger after they found a cheque he sent to the victim. Roger was saddened to hear of his son’s death, he told them that he was all he had, ever since his wife died of breast cancer, and told them that they better find their killer immediately before he does himself.

Roger was later interrogated again because a note he sent to the victim, calling him a “disgrace”, when asked about it, he confirmed that he didn’t really consider a victim a “disgrace”, and he didn’t call him that it because of the s*xting, since he done the same thing at his age, he was joking about the fact that the victim’s something is something compared to his, which we don’t know what he was comparing and how he was comparing it, and IT’S ALL THANKS TO VANNA. Although we don’t know what he was talking about, for some reason the player and Diego found it uncomfortable, and decided to get out of his trailer.

Roger became a suspect after Steve revealed that he was the last client, “Emma” had that afternoon. When informed of her death, he was saddened.

He was talked to again, after Mia and Hamilton discovered that “Emma” was pregnant with his child, before aborting it. He then showed his anger toward the victim, because he wanted a child so badly. However, the victim told him that she miscarried, where he later on, discovered that she aborted his child because it was a boy. 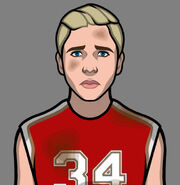 Alexei Smirnov, Roger’s late son.
Add a photo to this gallery
Retrieved from "https://criminal-case-official-fanfiction.fandom.com/wiki/Roger_Smirnov?oldid=178482"
Community content is available under CC-BY-SA unless otherwise noted.