Regina Turney, sometimes called as Rei Turney, was a fugitive, and was suspected of a murder of Brian Anloki.

Regina Turney is a 19-year old thug woman with brown skin and boyish hair. She wears a spiked headband. She has red eyes, and has tattoos on her shoulders to her arms. She weighs 143lbs and her blood type is O+.

Rei Turney is firstly suspected when she was found at Ayako Witherwood's sight, and she was then reported by her straight to the police. However, she was found innocent, but due to being a fugitive, she is brought unto custody temporarily until her brass knuckles (which she used to defend herself) was brought back. 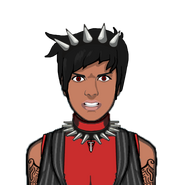 As she appears at The Job Scam.
Add a photo to this gallery

Retrieved from "https://criminal-case-official-fanfiction.fandom.com/wiki/Regina_Turney?oldid=57455"
Community content is available under CC-BY-SA unless otherwise noted.