Ready? Set? KABOOM! is a case featured in Criminal Case. It takes place in the Industrial district of Grimsdale.

After Hamilton was healed completely, Bruno decided to celebrate this by taking the whole team to see today’s race in ‘Industrial Race’. Mia didn’t like the idea as she doesn’t trust the citizens of the Industrial District, but Diego assured her everything will be alright. As they arrived there, they saw many gangsters and prostitutes, many knew Bruno, and a prostitute named Dolly who Mia and Hamilton also met before, came up to them and started arguing with them about their presence. He race starts, Kelemen turned out to be the flagman, and he introduced the racers, Track King, real name: Esteban Roland-Tavin with his car Thunder McKing, and the other racer was Racer-girl, real name: Gilly Gadot with her car Desire. The cars are in the beginning line, when suddenly Kelemen says his command to start the race. However, suddenly, out of the blue, Esteban’s car exploded with him in it. Mia and Hamilton went down to investigate.

There they found Esteban dead, and Gilly injured. Esteban’s body was sent to Hasuro, while Gilly’s was taken by the nurses. Looking at the conditions, Mia and Hamilton concluded that they are dealing with a murder. The duo discovered three suspects: Kelemen Kiss, Thunder McKing’s mechanic- Favourite, and victim’s father- Fabian Roland-Tavin. They later on were informed by Kelemen that the nurses mended Gilly and she’s ready to be interrogated.

The duo spoke to Gilly, and then continued their investigation. There, they found another suspect, Adolfo Arias. They also discovered that the victim was giving Favourite unwanted contact, and that he was also the ex-boyfriend of the late Edit Kiss, whom Hamad manipulated into causing her death. They later on caught Kelemen being high on illegal drugs.

The duo placed Kelemen in custody. They then discovered that Adolfo suspected that the victim might have been responsible for the death of a 15 year old racer called Theodore Gillenormand, who died during a race against the victim, and that Fabian disapproved of his son’s lifestyle, and that the victim made an illustration of himself stepping on Gilly who was drawn as a short troll like creature with a log nose, insulting her for her Jewish heritage. The killer was revealed to be Favourite. 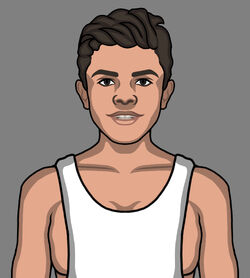 After being confronted with the evidence, Favourite told them that her full name is Favourite Gillenormad. Mia recognized the surname as Adolfo mentioned that the victim was responsible for the death of a boy with the same surname. Favourite revealed that the victim was indeed responsible for the death, and that it was no accident. She told them that Esteban was threatened by her younger brother, and so when racing with him, he pushed his car very hard, that it fell off the bridge, killing her brother. Favourite was devastated over her brother’s death, and was angry that Esteban got off scot free. A few days after that happened, a figure in a cloak came to Favourite, and told her that they heard of what happened to Theodore, and started comforting Favourite. They then gave her the idea to kill Esteban. She and that figure started working together to form a bomb which can be installed in his car. Esteban never knew Theodore was her brother so he trusted her to take care of his car, this is where she installed the bomb, and she set the timer so that he would die at the beginning of the race, where everyone is watching. Favourite was sentenced to 30 years in prison.

Although they arrested the killer, Chief Jones heard about the fact that Favourite had an accomplice, and so told Hamilton and Mia to go ask Favourite about the identity. Then, Fabian came to the station to ask for help, where Diego went with him in the interrogation room, where they waited for Hamilton to come to them. Shortly after, Bruno informed Jones and Hamilton that Kelemen wanted to speak with Hamilton, and since Hamida is in university at that time, Jones told Bruno to accompany Hamilton.

Mia and Hamilton went into Favourite’s cell. There they asked her about her accomplice, where she reminded them that they were wearing a cloak so she didn’t recognize them. However, she stated that after installing the bomb into the car, they gave her a card, which ended up throwing it at the bin, since she couldn’t care less about it. After searching for the card, they read it, and it didn’t have a phone number, address, or a real name, but a code name called “The Anoterous”. Neither Mia or Hamilton knew anything about those, except of the fact it was greek for “Superiors”. However, they were sure that this will not be the first murder they’ll interfere with.

Diego and Hamilton went to Fabian to see what he wants. He told the duo that he asked for them, because he wants something to keep as a token from his son, so he would be forever with him, and asked if they could search the car wreckage. After searching the car wreckage, they found a broken action figure toy, which survived the explosion, after fixing it, they gave it to Fabian.

Bruno and Hamilton went to speak with Kelemen in the cell he was held custody in. There he begged them to let him out. Bruno then told Kelemen that unless his mother comes to sign papers to get him out, or he pays the fine, he’d have to stay here for a week. Kelemen then told them that he never knew he was taking illegal drugs, and that he just asked a hooker for some painkillers, which when he swallowed ended up getting the effects of cocaine. The duo didn’t believe him, but then he told them to search the audience seats since that is where he met the hooker. After searching the seats, they found a bag, which looked like one that Kelemen mentioned, and they recognized as one which Dolly was holding. They searched her bag, and found a box of painkillers, which they sent to Sploder, who confirmed they had cocaine filled inside each pill. Bruno and Hamilton went to confront dolly about that, and gave her a fine, where she got mad, and started mocking Bruno, telling him that Savannah did the right thing when she cheated on him.

Adolfo Arias.
Add a photo to this gallery

Retrieved from "https://criminal-case-official-fanfiction.fandom.com/wiki/Ready%3F_Set%3F_KABOOM!?oldid=174808"
Community content is available under CC-BY-SA unless otherwise noted.