Randy Kilter is a main character featured in Season 1 of Criminal Case, where he serves as the Chief of Police of the Patriot City Police Department.

55 years of age, Randy has black eyes, short black hair, a moustache and a beard.

In his first appearance, he wears a white buttoned shirt underneath his black vest. Furthermore, he has a gamboge tape with "POLICE" in black words on his right arm and a police badge on the right side.

In his second appearance,

After arresting John Ballinsky's killer, the chief asked the player to come into his office to greet him. After the player greeted him, Randy told the player to go to the park to get something that he forgot to bring. While investigating the park, the player found a present from Randy, inside was a welcome card, greeting the player for joining the squad. After examining the present, the player thanked the chief for the card. 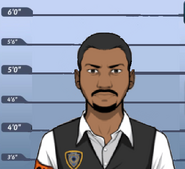 Randy, as he appeared in The House of Murder (Case #1 of Patriot City)
Add a photo to this gallery
Retrieved from "https://criminal-case-official-fanfiction.fandom.com/wiki/Randy_Kilter?oldid=188709"
Community content is available under CC-BY-SA unless otherwise noted.