Ramona Stewart was a suspect in the murder investigation of her husband Hector Stewart in Struck with Lightning (Case #1 of Alpha Bay).

34 years of age, Ramona has green eyes and long grayish hair which almost covers her left eye. She wears a green coat over a black dress. Additionally, she wears a red scarf. It is known that Ramona knows electronics and eats chocolate.

Ramona was flagged as a suspect after the team found a camera per which they discovered that she was the victim's wife. Though she seemed shocked to hear about her husband's death, it was revealed later that she was planning to divorce Hector as he was overprotective to her and that Gabriel Cyrus was inspiring to do it. However, she was found innocent after Richard Stamford was arrested for the murder.

Post-trial, she asked the player to find a photo album which included Hector and her pictures to remember him. 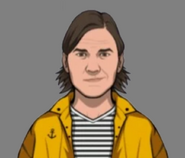 Hector Stewart, Ramona's late husband.
Add a photo to this gallery
Retrieved from "https://criminal-case-official-fanfiction.fandom.com/wiki/Ramona_Stewart?oldid=159896"
Community content is available under CC-BY-SA unless otherwise noted.