Rachel Priest was a suspect in the murder investigation of his brother, journalist Riban Priest in Secret Knocks the Door (Case #5 of Alpha Bay).

Rachel is a 27-year-old CCN journalist with brown hair and blue eyes. She wears a black suit with a badge of CCN in it. She is seen holding a microphone. It is known that Rachel has hacking skills, uses hand cream and works out.

Rachel got herself interrogated after Louis Leroux said Aiden and the player that she was the victim's sister. Rachel was not sad that her brother was dead, claiming he was a good-for-nothing and that he couldn't do any good article except scandals.

Later, the team questioned her again after learning she confronted the victim. She said the victim was going to publish an article about her saying she was a corrupt journalist working with terrorists. However, she was found to be innocent after thr team incarcerated Nina Madison for the murder.

Post-trial, counting the facts the team learnt from Nina, the team decided to uncover the secrets of Nina's gang, The Flames with the restriction of half of Street Valley. As their leader, Roger Spitfire denied all the things Nina said, they decided to search the CCN HQ to know the reasons behid the event and learnt that Rachel made an article about it. Rachel said there are high radiation in that place and that Mayor Drew Winston was in-charge of the event. Drew said a failed experiment took place here which made it a highly radioactive place and claimed to know nothing else. 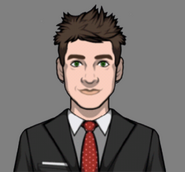 Riban Priest, Rachel's brother.
Add a photo to this gallery
Retrieved from "https://criminal-case-official-fanfiction.fandom.com/wiki/Rachel_Priest?oldid=165626"
Community content is available under CC-BY-SA unless otherwise noted.