Quang Vinh Ho (Vtn: Hồ Quang Vinh) is a main character in Criminal Case: Pheadmouth, where he serves as the Chief of Police of the Pheadmouth Justice Unit.

35 years of age, Vinh has black eyes as well as short black hair. He is seen wearing a white shirt under a green police jacket. He also wears green police cap, a pair of glasses and a tie.

Vinh is known as a top police coming from the best police academy. He is calm and professional in his job. Vinh often likes to listen to classical music and reads a newspaper in his free time.

The player may choose Chief Vinh to join the investigation of each crime scene (in any case in Pheadmouth) and provide hint bonuses. He is available as a 5-hint, level-10 partner. 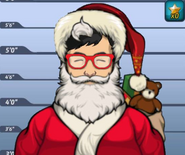 Chief Vinh, as he appeared in Murderry Christmas (Special Case #1 of Pheadmouth).
Add a photo to this gallery
Retrieved from "https://criminal-case-official-fanfiction.fandom.com/wiki/Quang_Vinh_Ho?oldid=113873"
Community content is available under CC-BY-SA unless otherwise noted.