Put Her Down is a case featured in Criminal Case. It takes place in the Grimsdale University district of Grimsdale.

Hamilton, Hamida and Vicky went into the prom dancing hall, when they entered the building, he saw Cindy, Mia, Yoyo, Sploder, Hasuro, Randall and the chief with his 8 months pregnant wife. Hamilton and Vicky went to greet them, while Hamida decided to ignore them and walk around. Hamilton knew that Bruno is coming to the hall with April, and wondered where Diego was, where Mia told him that Diego told them he’d like to have some time alone. Hamilton then released that Hamida wasn’t with him anymore, and went to search for her, where he found her hiding near the stairs.

Realizing how uncomfortable Hamida was feeling, Hamilton decided that they spend their time together, somewhere private and so they went upstairs, into one of the balconies. The two stayed there for 5 minutes, where eventually Hamilton got bored and asked Hamida if they could play a game, and suggested “I spy”. Whilst playing the game, Hamida spotted a dead body and pointed it to Hamilton. When seeing it, he told Hamida to go somewhere safe, and he went all the way down to the team and told them that someone was pushed out of the balcony.

Mia and Hamilton went to where Hamida spotted the body, where they discovered that the victim was Estelle Montserrat. During the investigation, Mia and Hamilton found three suspects: Nadine Marquez, Hamida’s brother- Nasim Mukhailif and Ernst Klein, who was Estelle’s prom date. Bruno and April then approached the duo, to tell them that they saw Estelle spending time in the gardens, before she died.

The duo continued the investigation, where they found evidence to add Norman Min- better know as New Ares to the suspect list and shockingly, Diego Diaz as well. In addition, they found out that Estelle turned down Ernst as she wanted her love life to be tragic and sentimental like the ones she read from and novels and that Nadine was mad at the victim for modeling a serial killer in one of her novels after her, after Nadine gave Estelle her permission to introduce her in her books. David then approached the duo, to tell Mia that she can’t continue investigating the case as her boyfriend’s a suspect.

After taking Mia off the case, Chief Jones paired up Hamilton with Randall to continue the investigation. The duo found out that Estelle seduced Diego to sleep with her 4 years ago, to win a bet and that she tried to apologize to him at the prom party for using him, but he turned down his apology as he was mad that he lost his virginity to her and not Mia. The duo also found out that Estelle unintentionally humiliated Nasim, after she accidentally pantsed him after tripping, during the prom party and that she went crazy for Norman after an enjoyable one night stand she had with him back at Vicky’s party. After collecting enough evidence, Hamilton and Randall found out that the killer was Nadine Marquez.

Nadine failed to deny the murder and was forced to confess, and revealed that she is one of the two people who were working on empowering the protozone. Nadine told them that her partner stole the protozone from the dome and showed it to her, Nadine wanted to tell on them, but her partner told her about the Anoterous and The New Olympian and said that they can empower the protozone to brainwash people into becoming their permanent slaves and with this they can team up with the New Olympians. Nadine wanted to refuse, but then her partner told her that if The Anoterous take over the city, they’ll kill her, making it better if The New Olympians won the war, which convinced Nadine to help improve the protozone as she didn’t want to die. Randall then asked why did she kill Estelle, where Nadine told him, that she was inside the hall near the balcony, when she got a call from her partner, that they showed the protozone to Galinda and Marisol, and they accepted them as members of The New Olympians and that they needs her help to pack the crates of protozone. After the phone conversation ended, Nadine went to the balcony, where she saw Estelle enjoying the view. Afraid that she overheard the conversation, Nadine pushed her off the balcony. Randall and Hamilton were disgusted by her and asked her the name of the partner, where Nadine freaked out saying that if she said a word, her partner may use the protozone to manipulate someone into killing her. Nadine was sentenced to life in prison.

After the killer was arrested was arrested, David requested for Diego and Hamilton to go talk to Norman and force him to reveal the identity of the person responsible behind the protozone theft. Mia then approached Hamilton and told him that the dean would like to speak to them.

Mia and Hamilton went to talk to the dean, where she told them that she wanted to honor the memory of Estelle Montserrat by continuing her novel series. She told them that a book-writing company offered to help, by reading all her books and that Estelle was already working on one but haven’t publish it yet, or shown it to anyone. The dean then asked for the duo to go search the gardens to see if Estelle left the manuscript there. The duo searched the garden and found Estelle’s purse, which they searched and found her manuscript. Before giving it to the Dean, the duo decided to complete the novel and gave it to Yoyo. After the dean received the book, she thanked them for their help.

Diego and Hamilton went to confront Norman, where they demanded that he tells them who was Nadine’s partner and where are they hiding the protozone, but Norman rolled his eyes, and kept insisting he is not a New Olympian and that he has no idea what they were taking about and left the conversation, pissing off Diego. Hamilton remembered that Nadine mentioned having a phone-call and told Diego, and they decided to search the balcony for Nadine’s phone. The duo found Nadine’s phone and unlocked it, then gave it to Rozetta who told them that the last phonecall Nadine received was from a girl called Alicia Hussey. The duo decided to go talk to Nadine, to see whether Alicia was her partner, where Nadine said “No” and then “Yes” instantly. Diego suspected that she was lying and demanded she tell the truth, where she revealed that she did know Alicia but she wasn’t her partner and that she was confused when her partner called her from Alicia’s number. Diego and Hamilton decided that they should talk to Alicia to find out who she lent her phone to, in order to call Nadine.

After helping Donna and finding out that Nadine’s partner called her using Alicia’s phone, David told Mia and Hamilton to search for Alicia during the party, but they were interrupted by Donna Walker who was announcing the prom king and queen of the school. Donna called Alicia’s and Ernst’s name, where suddenly some rope that was connected to an anvil, went loose, which fell over both the prom king and queen.

Donna Walker (GD)
Add a photo to this gallery 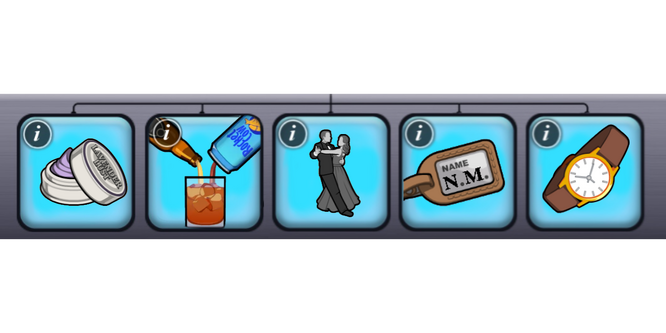 Retrieved from "https://criminal-case-official-fanfiction.fandom.com/wiki/Put_Her_Down?oldid=201276"
Community content is available under CC-BY-SA unless otherwise noted.