Criminal Case Official Fan-Fiction Wiki
Register
Don't have an account?
Sign In
in: All Fanmade Cases, Cases made by Kit0804

Price Slice is the second case in Criminal Case: Hollyoaks Edition. It was made by Kit.

After completing their first case, Ben walked in and said that someone had just been found dead outside Simone Loveday's shop, Price Slice. The team got there immediately, a woman named Maxine Minniver was found stabbed outside. They sent her body to Annalise. Due to it being in Price Slice, Ben suggested they speak to Simone again. At the end of the case, Trevor Royle was found guilty. Trevor said that Maxine had got into a very serious fight with Trevor's girlfriend, Grace after she was found innocent after the Happy Death Day events. So Trevor killed Maxine, and tried to frame Simone.

After the investigation, Patrick, Mitzeee and Diane wanted help. Diane had accidentally lost her husband's best tuxedo which cost £300,000. Ben knew Diane well so he helped her. Patrick had lost Maxine's necklace which he had bought her on her birthday. The team found it, and returned it. Mitzeee had lost her microphone which had 'Maxine' embedded in it. They found it and returned it to her. 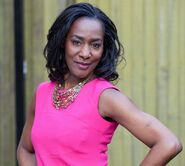 Waitress at The Hutch